Costa Rica Being Sold To China

Costa Rica News – China has stayed away from Costa Rica for a little while in terms of buying the country’s debt.  During this time Costa Rica has dug itself a hole that it cannot get out. 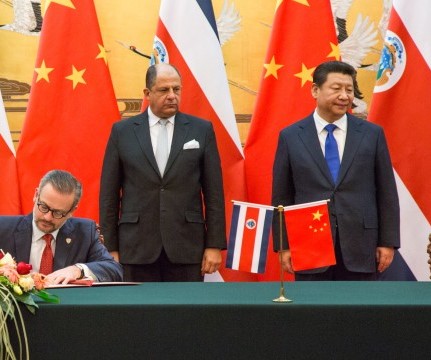 For me this was exactly what China wanted Costa Rica to do in order to bring a begging Costa Rica to the negotiating table.  What natural resources will Costa Rica be offering up this time in return for China’s assistance?

They already sold their soul for shark fins but what else can it offer?

Luis Guillermo Solis’ government has sent a document of intent to China’s government, asking to acquire domestic debt bonds. It is going to China for up to $1,000 million in financing.

The money would be for future budgetary costs, including debt interest, salaries and pensions. Solis’s visit with Xi Jinping in January has secured at least some of the requested resources.

An answer from China is expected by the end of this year. Then deadlines, currency, the amount and the interest rate will have to be negotiated.

If accepted, this would make Costa Rica the country with the third largest internal debt.

Domestic debt, according to the Treasury, was at a total of ¢8.8 billion as of last September. With the addition of bonds issued in foreign countries, the debt amounted to ¢11.7 billion, or 41.5% of the GDP.

Grecia the Toucan in Costa Rica Waiting on Prosthetic Beak