Costa Rica Scam – This is the story of my friend. I’ll call him Daniel not to embarrass him, although he was the first to admit to me he was an idiot. He is not. He is a prominent businessman in Costa Rica. He just got caught up in the moment of “descuido”, carelessness in Spanish. 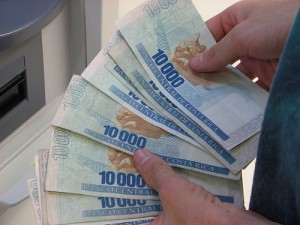 By chance, tuning in to one of the local radio stations, a Banco Nacional (BN) ad narrated Daniel’s story.

The scam is simple. The scammer scans the online classifieds and chooses his or her mark, calling about the item being advertised. The item is not important, the objective here is to determine if the vendor is “descuidado” and can be coaxed into divulging banking information.

Once the price is negotiated, according to Daniel he suspected nothing as the negotiations for the item was like any other- some haggling back and forth on the price, terms, payment and delivery. Like every other customer.

The deal was struck. The payment was to be made by direct bank transfer from the buyer’s to Daniel’s bank account. The item would be shipped by courier after payment.

The mark (my friend Daniel) is tested. The buyer askd for bank details. After settling on the name of the bank and the account number, it was agreed that transfer would be made the following day.

The next day, the buy calls Daniel.

“I am at the bank and the teller needs your pin and ‘clave’ (key) to finalize the transfer,” recalls Daniel of the buyer who had become a customer making the transfer.

Daniel, in his moment of “descuido” hands over (the telephone) the pertinent information that he used to access his account online. And now so did the buyer.

I don’t have to tell you what happened next.

Fortunately, Daniel did not have too much money in this account, being not his primary bank. The buyer whom Daniel has now considered a customer turned out to be a scam artist, getting away with some ¢200,000 colones of Daniel’s money, all the money he had in that account.

“The first time in all my years in Costa Rica is not so bad and I still have the item,” Daniel consoles himself at his idiocy.

The moral here is simple. The Costa Rican banking industry has set up a SINPE (Sistema Nacional de Pagos Electrónicos) for interbank transfers.

This is a long, long number – 17 digits – and the only number a potential depositor needs to put money into your bank account. He/she does not need your account number (it is actually included in the SINPE), nor your ‘clave’ or code or PIN. One only number that can be used to make transfers from within the same banking institution or to others, both State and private.

The SINPE is also referred to as the “cuenta cliente”.

The scam involving bank transfers is at such a level that, as I mentioned before, the Banco Nacional has to buy air time to let its customers (and customers of every other bank) about it.

The SINPE, operated by the Central Bank of Costa Rica (Banco Central), can be used to transfer funds electronically between accounts.

Now you know, don’t pull a ‘Daniel’, guard your banking information. The SINPE system is secure if used properly and ‘con cuidado’.

As to Daniel, he filed a report with authorities, who are “investigating”.

Why Hard Facts Aren’t Enough to Alter Our Beliefs

How to Make Meal Replacement Shakes At Home