Costa Rica News – The National “Clodomiro Picado Twight” Awards for Science and Technology have been given out, to two outstanding individuals, mathematician Jasson Vindas and microbiologist Carlos Diaz Rodriguez. The awards were announced at the auditorium of the Ministry of Science by the Minister of Science, Alejandro Cruz. 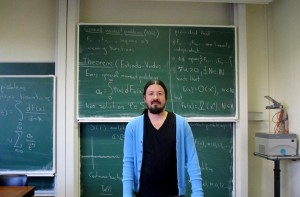 Vindas has both a master’s and a doctorate from the State University of Louisiana. He won one of the awards for his work on asymptotic analysis of generalized functions, which is a monograph listing the most important results in his field during the last 40 years. He also presented solutions to some mathematical problems he has resolved. He is just 33 years old and quite accomplished. He works as a professor at the Ghent University in Belgium. A jury member said, “This study is a significant contribution and provides contributions to many fields of mathematics.”

The other winner, Rodriguez, owes his award to his research about the degradation of emerging organic pollutants in sewage sludge with the ligninolytic fungus. He holds a doctorate in biotechnology from the Autonomous University of Barcelona.  He taught at the Centre for Research in Environmental Pollution at the University of Costa Rica. His work described the development of a new biotechnology strategy for removing contaminants in sewage sludge, that are generated during the process of wastewater treatment. About his work, a juror said it “presents solutions to major problems for water resource pollution, particularly rivers and lakes.”