Avocado growers in the region of Los Santos fear losing 10,000 kilos of fruit, as they have almost 20 days of being stored and there are no buyers.  The fruit has not been sold by the strong increase in imports from Mexico and Chile, said the producer and director of the Fruit Growers Association of Los Santos, Oscar Bonilla. Over the 20 days of being cold, he added, avocado quality has been lost and damaged. 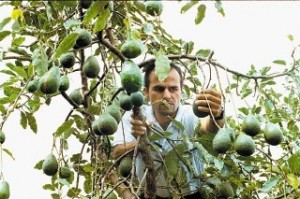 Francisco Brenes, regional director of the Ministry of Agriculture and Livestock (MAG) in the Central Valley East, said there is a national marketer of wariness toward avocados produced in Costa Rica.

Meanwhile, Bonilla said there was no explanation for this preference, because the quality and price are the same.

According to Brenes, the country consumes 12 million kilos and 13 million kilos per year of this fruit. Therefore, there is a high local production shortfalls and should therefore absorb the entire volume.

In the area of Los Santos encouraged the cultivation of avocados, especially coffee, as a second income. Were seeded Hass avocado or height equal to that which is imported from Mexico, Chile and Guatemala.

Producers argue that the marketing problem is occurring for three years, although the crop has now been nearly 10 years in the area.

MAG figures indicate that in Los Santos is 975 avocado growers and the area is equivalent to planting 1,900 hectares. The data were obtained from a study of the sector in the area.

Recently developed another growing area in Tierra Blanca and Pacayas, and on the banks of Reventazón with the management plan of the Mackenzie River basin.

In the Manufacturers Association of Los Santos are built around 50 farmers. They generally sell top quality fruit to one of the major supermarket chains, but this year have had no response, despite the many efforts made, Bonilla said.

Brenes acknowledged that he met with members of the Association and who know of the existence of fruit held in storage. After that meeting, two measures will be implemented.

One is to negotiate with the National Board of Trade of Farmers to control is not sold in those markets imported avocados, because that would violate the law from offering foreign products there.

The other is a promotional campaign to relaunch the national avocado.

10-Month-Old With Down Syndrome, Will Be The Face Of Kids Swimwear Line