10-Month-Old With Down Syndrome, Will Be The Face Of Kids Swimwear Line

This is a story that uplifted my heart when I saw the picture of the beautiful baby. Ten-month-old Valentina Guerrero has a very exciting new job: she’s the face of Spanish swimwear designer Dolores Cortés‘ 2013 kids’ collection and appears on the cover of the brand’s American catalog. Valentina also has Down syndrome. 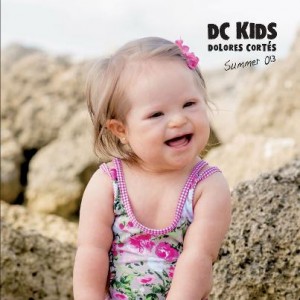 Cortés showed her collection in Miami Beach last Friday and Valentina made her debut on the runway. Though the adorable baby isn’t the first child with Down syndrome to model, (6-year-old Ryan Langston has appeared in ads for Nordstrom and Target), AdWeek notes that “[she] is said to be the first person with Down syndrome in history to be the main model of a campaign from a prestigious fashion designer.”

Valentina’s mother, Ceceliz told the Down Syndrome Association of Miami that when Dolores Cortés USA contacted her family, she “was excited mainly because the fact that they are placing Valentina on the of a catalogue sends a very clear message of inclusion; all children deserve the same opportunities, regardless of their physical, economic, social, racial or medical condition.”

And the designer is equally thrilled. “People with Down syndrome are just as beautiful and deserve the same opportunities,” Cortés said in a statement.

Though the press surrounding Cortés’ choice has been mostly positive, some critics take issue with the designer’s choice to call out Valentina’s special needs. On XOJane, S.E. Smith writes, “While I firmly believe that things like this are important social steps, the larger the production made about them, the more disabled models are othered. When you’re singling them out for special attention, you’re reminding everyone that they’re different, instead of just working models like anyone else.” Smith argues that while disabled models should be employed more often, there is no need to publicize their disabilities. She writes that Cortés went out of her way to announce that Valentina has Down syndrome to “[make] sure everyone knows how progressive she is.”

Whether the designer’s choice is a publicity play or not, she is taking steps to help the special needs community. AdWeek reports that Cortés plans to donate 10 percent of the profits from the DC Kids’ collection to the Down Syndrome Association of Miami.

Inquiry: The Glacier Within