Costa Rica Travel News – Costa Rica travel just became a little bit more efficient. Now you will only have to wait in one line at your airline’s ticket counter. 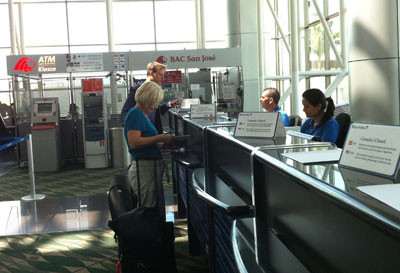 Beginning on the 3rd of December, all people traveling from Costa Rica will no longer have to stand and wait in line to pay their departure tax before taking a flight. The current amount of the departure tax is $29.

Afterthat date, this tax amount will be included in the cost of your airfare. This was stated by the vice president of Costa Rica, Ana Helena Chacón.

According to Chacon, this agreement was made between multiple entities including: banks, airlines, immigration, airport management, the Ministry of Finance and the Costa Rican Tourism Institute (ICT).

The idea (pretty much common sense, but that can take a while to become obvious in Costa Rica)  is to simplify procedures, reduce overhead costs, and make the Costa Rica airport departure more effecient.

The departure tax in Costa Rica must be paid everytime someone leaves the country by air. It was approved on October 24, 2002.