Costa Rica News – Lisa and Antonio Marxuachs of Steamboat Springs want to turn you on to the exotic flavors of chocolate bars made from heirloom cacao beans, but it’s much deeper than that. 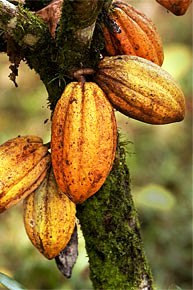 #The couple’s bigger goal is to acquire approximately 35 acres in La Tigra (literally, The Tiger), Costa Rica, where they hope to engage in an “agri-forestry” project by planting cacao trees, which are very efficient at sequestering carbon dioxide. The goal of the Marxuachses, who maintain a 1,500-square-foot greenhouse at their home on Fourth Street, is consistent with their commitment to regenerative agriculture — farming organically in a manner that improves the land while producing a crop.

#“In regenerative agriculture, you are mimicking nature,” Lisa said.

The AgriCultures Network describes regenerative agriculture, when practiced on decimated forests, as planting an “analog species” that can restore the land by returning nutrients to the soil, and in some cases restoring groundwater, by producing a crop.

#The Marxuachses also subscribe to the biodynamic approach to farming. Biodynamic farmers aspire to create a diversified agricultural operation where the different elements are integrated to the extent they function like a single organism, according to the Biodynamic Association.

#To realize their goal, the couple has initiated a Kickstarter campaign under the name of their Pura Vida Gardens Chocolate brand, seeking to raise $99,000 by Oct. 23 to purchase the land in La Tigra. So far, they have raised $5,217 from 60 backers. The Kickstarter web page includes a video that explains it all.

#“This is a mountainous region of Costa Rica bordering the largest rainforest preserve in Central America,” Antonio said.

#Originally developed as a coffee plantation at an elevation of 2,000 feet, Antonio said with climate change, it’s no longer ideal for growing coffee. In fact, he said, the Costa Rican government, which typically ranks in the top 10 nations in the world for its sustainability programs, has been encouraging coffee growers to move to higher elevation for years.

#“I’m in love with everything Costa Rica is doing,” Antonia added. “They’re very progressive in terms of workers rights and fair wages.”

#In the meantime the Marxuachses are making small batches of Pura Vida chocolate bars in their kitchen, which Antonio says is legal under Colorado’s Cottage Food Act.

#Breaking a small square off a Pura Vida bar, Antonio exclaims over its intense fruity notes. Then he switches gears to prove that cacao beans, like wine grapes, vary tremendously with their terroir. He proves the point with a dark chocolate that is unusually creamy for a bar containing a high percentage of cacao.

#Because they are producing the finished project in very small batches, people interested in seeking them out are advised to check availability at the Community Agriculture Alliance Market website.

#Whatever happens with the Kickstarter campaign, the Marxuachses intend to push forward.

#“We’ll see it through,” Antonio said. “If we don’t make our goal, we’ve learned enough we feel comfortable” moving forward. “Our commitment to cacao and biodynamic farming remains”