Ewing came into this event at No. 7 on the WQS, but after the massive win now sits at No. 4 with a spectacular performance on Finals Day — posting a near-perfect 9.27 with ferocious backhand hits to the critical sections of the wave to begin the Final against an in-form Olamana Eleogram (HAW).

Eleogram did his best to fight back with a vicious backhand attack of his own to match Ewing’s, but when the horn sounded, it was the 18-year-old Australian who earned the honorary chair up the beach. 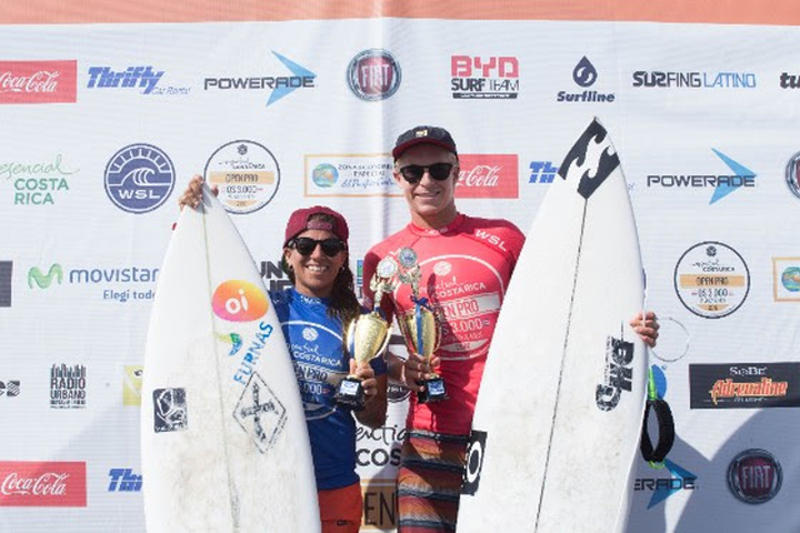 “I’m still tripping right now, it doesn’t feel real at all to me,” Ewing said. “It was amazing for that first wave to just come straight to me and it was probably one of the best lefts of my life so far. It feels amazing to earn 3,000 points and to actually win a contest at a bigger QS is great. I feel like I’m getting used to the competitive scene on the QS and all my big results haven’t even come from wins, they’ve just been a runner-up and Quarterfinal. To win a contest and have my friends carry me up the beach is just indescribable.”

Ewing had to overcome a heavyweight bout in the Semifinals against Costa Rican Noe Mar McGonagle (CRI) and began that heat with another near-perfect 9.00 on his backhand after taking down Frederico Morais (PRT) in the Quarterfinals. McGonagle fought back with a variety of attacks on separate occasions, but couldn’t earn the 7.01 needed to top Ewing for a shot at the Final.

“There were a lot of really good guys here — that was just a stacked event and surfing against Noe Mar [McGonagle] in his home country was incredible,” Ewing continued. “I’ve just been trying to focus on remaining in the moment so much here and I feel it’s really helped me. Getting second, there’s that bit of emptiness like I left something out there, so to come away with a win is great.”

Runner-up Olamana Eleogram (HAW) proved his event standout status in defining fashion with technical surfing throughout the final day of competition. The Hawaiin took down the high-flyingJorgann Couzinet (FRA) with a massive 8.83, performing a risky maneuver in another heavy closeout section once again. Eleogram then dispatched an in-form Timothee Bisso (GLP) in the Semifinals with more clutch surfing when he needed it most — posting an 8.00 in need of a 6.17.

But, the Aussie phenom proved too much for Eleogram’s electric surfing and the Maui-native will head back to the islands with 2,250 points.

“It feels really good since I haven’t done a lot of events this year, just some Aussie ones which didn’t really suit me unlike this wave here,” Eleogram said. “I definitely didn’t imagine myself making the Finals and once I did I really wanted to win, but Ethan [Ewing] was ripping. It was great to get the right waves and stoked on my surfing. It’s my first Final in a few years so it feels like I still got it a bit after that one and just the waves feeling so much like home really sparked everything.”

Prior to Ewing’s chair-up the beach, the Essential Costa Rica Open Pro Women’s QS3,000 Final took to the water with Championship Tour (CT) qualifying positions on the line.

In an all-former CT bout between Pauline Ado (FRA) and Silvana Lima (BRA), the Brazilian struck first with a low 4.83 and backed it right up with a 6.33. But, Ado stayed right behind her with a 4.17 before the two had a critical exchange that witnessed Lima post an excellent 8.00 to Ado’s 6.83. But, Lima shut the door on Ado with a massive air-reverse to earn an 8.57 and then ended with an 8.83 to combo the Frenchmen for a huge win.

“I’m just so stoked right now to finally get a big win this year and get some really important points,” Lima said. “I gave that Final more than my one-hundred percent and was really hard on myself each time I fell which why I think it ended up helping me. This win is such a relief because now I can spend time at home instead of going to Japan and prepare for the event in Australia. It feels amazing to come to an event with my goals in mind and be standing here able to say that I did my job and completed that goal.”

The win projects Lima in to No. 4 on the QS, surpassing Keely Andrew (AUS) and Sage Erickson (USA) with her chances of CT re-qualification now nearly solidified. Her campaign to victory began with a win over another former CT competitor Paige Hareb (NZL) and QS hopeful Brianna Cope (HAW) in the Semifinals.

“I love competing,” Lima continued. “It’s my life and I love it. I haven’t even thought about life after competition yet because each event gets me so fired up — I just love it. I’ll go to Indonesia after time at home for some training and really get set for Australia so I’m hoping to go there more than prepared. There’s still some CT girls who are on the border of qualifying and will be in that event so it’s going to be a great one over there.”

Pauline Ado’s (FRA) runner-up performance pushes her to No. 7 on the Women’s WQS Rankings over Laura Enever (AUS) after an incredible run in Costa Rica. Ado took down Peruvian threat Anali Gomez (PER) in the Quarterfinals before doing battle with event threat Mahina Maeda (HAW) in a critical Semifinal that she had to muster a comeback in. Though a win would’ve helped her CT qualification cause all the more, Ado came out of the water with a smile on her face and determination for the next event.

“When you’re in the final you always want to win but I’m happy with that result,” Ado said. “Silvana [Lima] was just on fire and I got that one left which felt good to really push on, but I think I should’ve given myself more opportunities. I’m improving my points which is a good thing and I’ll try to keep this momentum going through the end of the year.”