Cocaine Under The Sea; The Costa Rica Dive Police

Costa Rica News – In March, 2006 police became aware that there was a metal box attached to the hull of a ship in the port of Limon. It had 50 kilograms of marijuana. Similar situations have been occurring as recently as last year, making the Ministry of Security see the need for dive patrols in the war against narco trafficking. 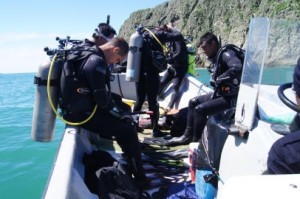 Last summer, the first Police Dive Team started training. The 8 police divers finished the course in December. They belong to the coast Guard headquarters in Puntarenas, Limon, and Quepos. Officials hope to have 20 divers by 2015, in order to work in all the Coast Guard sites throughout the country.

The director of the National Guard, Martin Arias, said that some members of the special group had previously taken dive courses and that the group went to the US for training. Mario Barrientos, the CEO of the academy, said, “With this team we have the ability to carry out missions of search, retrieval and inspection under water, which is a key part of growing component of the Coast Guard.”

The officials have invested $18,000 in divewear, masks, and tanks that can be used down to 100 feet deep. The masks are designed to protect against contaminated water, allowing the team to work in hazardous situations. They also have underwater communication radios so the police divers can communicate with one another.

Clearing the Fetters and Fretters