Costa Rica News – As we get closer to December 21st, 2012 the signs that the world is coming to an end seem to be popping their head up each and everyday. Multiple earthquakes, Hurricane Sandy, maybe it is time for people to start preparing for the end. Buah, Ha, ha, ha, ha (Again my Evil laugh) 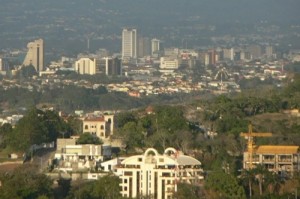 Costa Rica’s National Emergency Commission (CNE) today declared a green alert for the Greater Metropolitan Area (GAM) due to the number of earthquakes that have occurred in this area in recent days.

The announcement was made just a day after Escazú had seven earthquakes in less than 13 hours.

According to the Volcanological and Seismological Observatory of Costa Rica (OVSICORI), after the earthquake in Nicoya, there have been approximately 2000 aftershocks, just in the province of Guanacaste.

Regarding seismic activity around Escazú, the National Seismological Network, said there have been seven earthquakes ranging from 2.2 degrees to 3.1 degrees of magnitude, which an epicenter in Escazú, which extends from San Antonio de Escazú to the vicinity of San Antonio de Belén.

The CNE recommended that people do not panic and instead take preventive measures. First understand the environment you live in, checking for hazards like unstable slopes, steep slopes or unsuitable soils.

Also, check the status of your home and have an emergency plan, this applies to workplaces and schools as well.