Close to $15,000 Allegedly Stolen from Guests at Barcelo Hotel in Tambor

Costa Rica News – The last thing that you want to have to worry about is having your personal items taken from your room while on vacation.  This is allegedly what happened over last weekend’s holiday in Costa Rica. 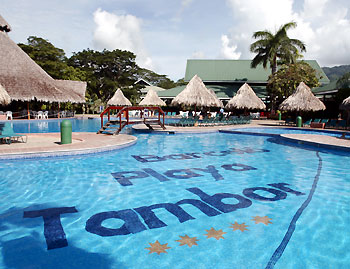 Hotel guests are often advised to lock up their valuable in a safe before going out for the day, but what about while they are sleeping at night? In the Barcelo Hotel in Tambor, many guests were robbed during the night.

The hotel’s director admits there are not security cameras or enough guards, so it is up to the police to figure out what happened.

One guest awoke to a moving shadow and assumed it was from someone sleeping in the other bed, but then he saw a man wearing a cab. The man fled and left the guest locked in the room to find his cell phone missing.

Eight rooms were affected, in total. 30 people, including 7 children, were in the rooms. They lost phones, cash, jewelry, cameras and tablets. The goods missing value an estimated 8 million colones or nearly $15,000.

One of the victims expressed concern that someone was so close to her and her kids without them knowing. Everyone wonders how the thief or thieves got into the rooms. Master keys were not swiped during the night or early morning in any of the rooms. There were no fingerprints found on the glass doors to the balconies.

The hotel was operating at full capacity, because it was a holiday weekend. They have 402 rooms and can house up to 1,000 people.

The hotel is making a claim with their insurance company to pay for the stolen goods.