China Detains Hundreds of Militants in the 23rd Anniversary of Tiananmen

Chinese authorities arrested hundreds of militants on the occasion of 23rd anniversary of the repression of the democratic movement in Tiananmen Square in 1989 and sharply rejected U.S. appeals today to release those imprisoned since then.  The appeal launched on Sunday by the U.S. State Department constitute interference in the internal affairs of China and are “unfounded accusations against the Chinese government,” said Liu Weimin, China’s Foreign Ministry spokesman. 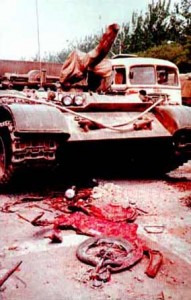 China still sees the movement as “counterrevolutionary rebellion” and refuses to discuss compensation for the families of the victims.

“The government and the party reached a clear conclusion about this incident,” said Liu.

About ten people remain imprisoned for their involvement in the demonstrations of the second spring in Beijing, for which more than 1,600 Chinese were sentenced to prison, according to the foundation Duihua (Dialogue), based in the United States.

The government seeks to prevent any public discussion or commemoration of the events of 1989 and the subject remains taboo in the mainstream media.

In social networks, any search on the date of June 4, the number 23 (by 23 th anniversary) and the word “candle” was blocked on Monday.

In Beijing, about a thousand people from various regions were arrested during the days before the June 4 and sent back to his home province, told a petitioner.

“Numerous buses were brought to South Station in Beijing on Saturday evening to question the petitioners,” said Zhou Jinxia, ​​who lives in Liaoning (northeast).

“There were between 600 and 1,000 petitioners arrived in China. They took our identities and began to send back to our hometowns, “said Zhou.

Despite police surveillance, more than 80 civil rights activists gathered in a square in Beijing with placards and shouted slogans calling for the rehabilitation of the 1989 movement.

The photos posted on internet that show rally protesters waving large banners which read: “Remember our fight for democracy, freedom and rights, and the heroes who had a tragic destiny.”

A similar event took place last week in Guiyang, where police arrested at least four of the organizers, according to the Chinese Human Rights Defenders (CHRD).

As in previous years, surveillance of dissidents was reinforced, said one of the most famous, Hu Jian, in his microblog.

Some were intimidated, as Yu Xiaomei, in eastern Jiangsu Province, which claimed to have been followed by three men today, as he left his home.

“I recognized one of them. Two years ago I stopped and it hit me. I ran away, now I dare not leave, “he said.

The only authorized Chinese territory commemoration will take place on Monday evening in Hong Kong, the British territory returned to China in 1997, which enjoys a special status which guarantees freedom of speech and expression.

Organizers said they expect 150,000 people gather at a candlelight vigil in memory of the victims.

Only in Costa Rica for Week of June 4th

Jorge Rojas to Step Down as the Director of the OIJ

Where is Costa Rica on this issue???? Lady Laura quick to condemn USA and Arizona on immigration. Yet in China killing their own enslaving, torturing?? Oh! wait Oscar Arias who got a Nobel Peace prize jumped ship form a democracy to communist country all for cash and a stadium we did not need. What a bunch of Hypocrites here. China wearing sheep clothing with a dragon underneath. Just wait.