Catalonia to Declare Independence From Spain

World News – Catalonia will declare independence from Spain within days, the region’s leader said late Tuesday after the Spanish king made a televised speech accusing secessionists of fracturing society.

Carles Puigdemont pledged to defy Madrid and implement the results of Sunday’s banned independence referendum which went ahead despite a violent crackdown by Spanish police that left 900 people injured.

“We are to declare independence 48 hours after all the official results are counted,” he said in an interview with the BBC. “This will probably finish once we get all the votes in from abroad at the end of the week and therefore we shall probably act over the weekend or early next week.”

Catalan officials say that 90 percent of the 2.3 million people who voted Sunday were in favor of independence. But fewer than half of those eligible to vote turned out.

Spain has been rocked by the poll and the Spanish police response to it, which saw batons and rubber bullets used to prevent people voting. The bloody scenes brought international condemnation.

Catalans took part in a general strike and protest Tuesday, shutting down road traffic, public transport and businesses and ratcheting up fears of unrest. 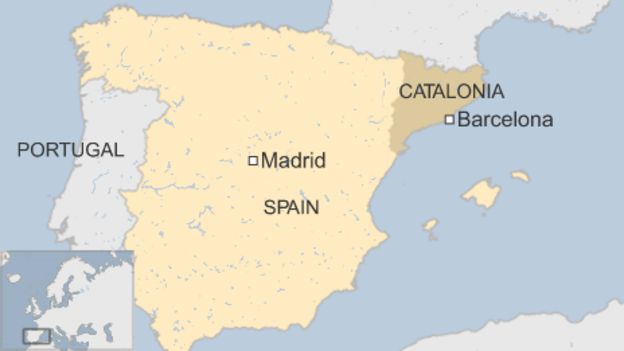 “Today, Catalan society is fractured,” the 49-year-old monarch said in a rare political intervention, referring to the developments as “very serious moments for our democratic life.”

He called for unity but said Catalan leaders had shown “an unacceptable disloyalty towards the powers of the state.”

Catalonia, Spain’s richest region, has its own language and culture and a political movement for secession that has strengthened in recent years.

Spain’s Caixabank, Catalonia’s largest lender, and ministers reassured bank customers that their deposits are secure from the growing crisis.

“Catalan banks are Spanish banks and European banks are solid and their clients have nothing to fear,” Luis de Guindos, Spain’s Economy Minister said Wednesday.

Spain’s Banco Sabadell, the country’s fifth-largest bank with a large business in Catalonia, also attempted to calm jitters. Both banks have seen their share price fall in recent days amid the turmoil.