Dusk is quickly descending. Moments after taking my seat at streamside, I hear something in the water a short distance downstream. I turn to see a young, full-grown deer standing in the shallow current. At the same moment, it spots me, and a split second later the animal bounds across the creek and up the steep bank in three leaps. The water’s edge has always been a place of danger for deer and other prey animals, so they evolved a highly developed flight reaction at any hint of a predator. 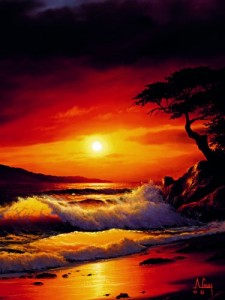 Dusk deepens, and with it the palpable mystery of life. One feels, as the last light of day drains from the skies, that one knows nothing and is nothing. It’s a tremendously liberating feeling.

The sounds of nature, dominated by the washboard of water musically flowing by at my feet, and the noises of man, dominated by the roar of engines from the racetrack a couple miles away, co-mingle without conflict in the darkening parkland.

Experience drains out of one with the light of the hot summer’s evening. The mind falls silent, and its content —the useful and useless memories —ceases operating. Psychological time stops, and for a little while at least, everything simply is.

That, you might say, is fine for the individual, but in the meantime man is plundering the earth, poverty is becoming more acute, and conflicts are raging on. Something far greater than a few individuals sitting in samadhi is urgently needed; a revolution in consciousness and a political manifestation are urgently needed.

Apologists for the status quo on the right deny that humankind is destroying the earth and ourselves in direct proportion; gradualists of the left prop up progressivism with mathematical models purporting to show that ‘we are living in the most peaceable era of our species’ existence.’

Others, no less inclined to wishful thinking, say that a revolution in consciousness is already in progress, and that humankind is awakening to a planetary civilization.

I would like to be so sanguine, but human consciousness is in fact accelerating in the opposite direction. The question to 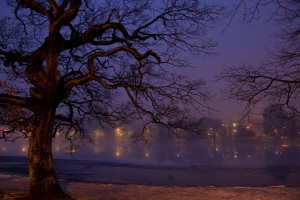 my mind is this: Is the exponential growth of darkness in human consciousness producing a growing evolutionary pressure for conscious transmutation?

Thought is a separative mechanism. Its fundamental principle is to remove ‘things’ from the environment and prepare them for use. As such, it obviously has its place, since it has enabled humans to break the bonds of niche and exploit any and all environments.

However, thought doesn’t stop with utilitarian separations, but fabricates and sustains psychological division and the separate self—the personal and collective ego —infused with the significance of life itself. The utterly unwise use of thought has brought the earth’s ecosystems, and the human spirit, to the point of collapse.

Without insight into the separative nature of thought, inner and outer fragmentation has inexorably proliferated, threatening the irreducible wholeness and healthiness of nature and humanity. 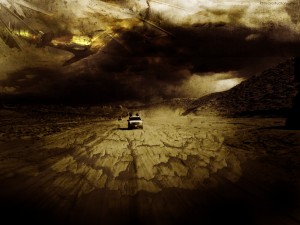 In reaction, modernity has given rise to two attitudes, both of which are indisputably false–that it doesn’t matter what happens to humanity, because life has no meaning and our evolution is a chance occurrence; or that humankind is progressing, and can go on the way we are indefinitely.

Does what happens to humanity matter to more than just us? Yes, because all sentient species in the universe have the potential to consciously awaken cosmic intelligence—that is, to become sapient creatures. That has nothing to do with a separate God, or a deity projected as perfect thought, but with intelligence without design.

Humankind is meant to live in harmony on this incredibly beautiful planet, not plunder it and make cyborgs of ourselves. We need to draw a clear line now between human beings and machines, or man will become a machine. There is no such thing as perfection, but human beings can and must live in imperfect harmony on this earth, or we will become extinct.

Obviously a revolution in consciousness is urgently necessary, but just what does it entail? First and foremost, a psychological revolution means the end of thought’s domination —both in the human mind/brain, as well as ecologically. Such a radical change in consciousness would manifest politically quite quickly, enabling humanity to manage the extreme challenges facing all people in the global society.

People all over the world are beginning to awaken, and for the first time in human history, a planetary psychological revolution is possible. The question is, can the breakthrough occur now?