Costa Rica News – With rising electricity prices, the Costa Rican Electricity Institute (ICE) is investigating ways to use solar power to provide clean energy to customers. Bill Clinton, a former US president encouraged the use of solar power on his visit to this Central American country. 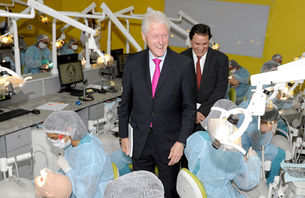 Clinton spoke in front of 450 people in the Universidad Latina auditorium in Montes de Oca.

The former president congratulated Costa Rica on being the greenest country in the world and encouraged the people at the conference to make the most of clean energy. He called the attention to the country’s flat roofs, where solar panels can easily be placed. Clinton recognized that the country is small and vulnerable to violence but at the same time its location is ideal.

The ICE ran a pilot program in 2010 for clients interested in generating their own electricity through solar power and other clean energy sources. This year, the company revealed that the results surpassed their expectations. 170 projects were completed and 230 are still waiting to be installed.

Clinton visited Costa Rica as honorary chair of the Universidad Latina, which celebrated its 25th anniversary. This university is part of the Laureate program, which is recognized all over the world. Many local authorities and chairpersons of the university attended the speech and applauded the president’s wise words.