Costa Rica Sports News – Costa Rica has been the big surprise of the tournament so far, winning the Group of Champions and then beating Greece on penalty kicks in the round of 16. 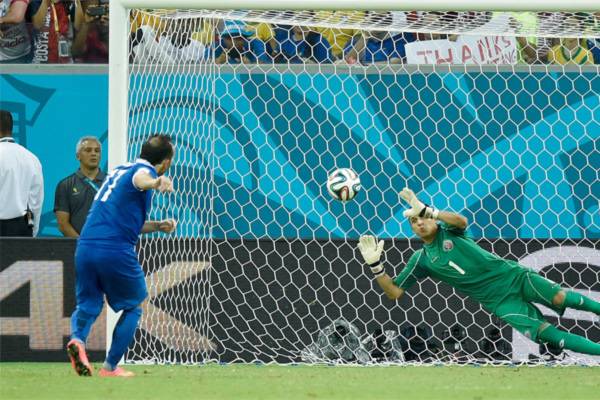 But after being slightly favored against the Greeks, Costa Rica returns to its role as big underdog in the quarterfinals, facing a great Dutch attack that has scored 12 goals in four matches.

While the Netherlands has looked great on the attack, it needed two late goals to beat Mexico in the round of 16, and its defense was under siege at times.

Sportsbooks monitored by Odds Shark had World Cup betting odds for this match with the Netherlands at 9-20, Costa Rica at 7-1 and a draw line at roughly 4-1.

Costa Rica is led by its defense, which has been terrific so far. It was a man down facing Greece after a second-half red card. While it gave up a late tying goal, it held the Greeks scoreless in extra time with 10 men.

The Dutch striker duo of Arjen Robben and Robin van Persie each have three goals, and they have to be the guys the Costa Rica defense must key on.

Wesley Sneijder is a very creative midfielder who likes to attack, and while he has not been in top form, he scored in the Mexico match, and his play is key. The Dutch midfield has to push forward and set up the attack, and it is especially important it gets back to help on defense, as Costa Rica will look for counter-attacking chances.

Joel Campbell and Bryan Ruiz are the two key strikers for Los Ticos, and they have to pressure the suspect Netherlands defense. They must capitalize on scoring chances, as Costa Rica may not get many of them.

The Dutch have the superior midfield, but the Dutch Football Association (per FIFA) announced that defensive midfielder Nigel de Jong is out for this match due to an injury, and defender Oscar Duarte is suspended for Costa Rica after picking up his second straight yellow card in the win over Greece.

Costa Rica will play great defense again but will miss Duarte’s presence. The Dutch are close enough to have a sniff of completing the job they narrowly failed to finish in 2010.