Another Waste of Money Coming to Costa Rica

Costa Rica News – Although the arrival of this brand shows the expansion of business in Costa Rica and foreign investment, I would rather have a sewage plant or large recycling plant than a sell out store like this. I am sure that it will be highly successful in Costa Rica since it sells trinkets that are overpriced and will be seen to the teens as a sign of wealth and acceptance. 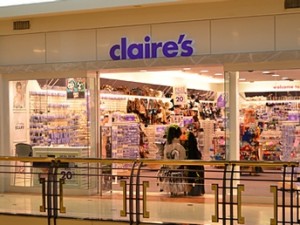 Too bad the lessons of spending money wisely cannot be taught. Like in the USA the society of Costa Rica is one based on dept and credit cards.  What kind of crash would there be if credit lines were all of a sudden called for full payment? I am sure we have all seen the wooden house that is falling apart with the satellite TV on the roof or the high end car parked outside.

I completely forgot what this was supposed to be about, my fault…….oh yeah…..Claire’s is coming to Costa Rica.

Girls, tweens, and teens across the U.S. know and love the Claire’s brand. This store is a leading retailer of accessories and fashion jewelry. It’s a store similar to the Bijoux chain we already have in Costa Rica, but geared toward a younger crowd. Most of their pieces are only for kids.

Claire’s is on it’s way to Costa Rica, as well as Colombia and the Philippines. They are working on a license agreement for Brazil, Scandinavia, and the Balkans.

They have one store already open in San Jose, Costa Rica. Their chief executive officer, Jim Fielding, said, “We continue to identify expansion opportunities worldwide. Our franchise partners have opened stores in three new countries in 2013 and we expect to enter an additional three countries during the rest of the year. We are pleased with our progress to date and encouraged by the opportunities.”

They hope to be open in Brazil before the 2014 FIFA World Cup. Sweden and Serbia are also on their wishlist for branch expansion.

They say that their market is girls ages 3 to 35, though most people over the age of 16 would feel silly entering one of their stores! They have an alias brand, Icing, that is for a slightly older market. They have 3,094 stores in the U.S. and 414 throughout 25 other countries. Many are in the Middle East.

Their forward momentum could hit some bumps in the road when it comes to political situations, uncertainty about the foreign brand, consumer preferences, credit card agreements, and employment laws in all of the different countries.

So we can all look forward to seeing more money wasted on these trinkets in Costa Rica and the world, but with acts like that of Miley Cyrus there is little hope for the future of this world…….

Which Way to Go, Porcelain Veneers or Crowns?