San Jose, Costa Rica – The Municipality of Alajuela plans to build a bus terminal and train in an area of ​​two hectares in El Cacique, which for years operated an office. The cost of this project is not yet been projected. I am guessing that if this does get approved it will finally be complete in about 10 to 15 years, for Costa Rica construction take the estimate and add 6 to 10 years. 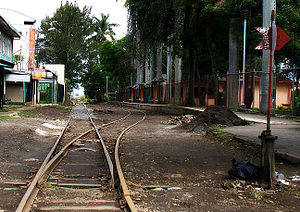 Robert Thompson, mayor of San Jose, said the Legislature authorized the council to transfer the property. Now we just need to give have a second debate, possibly Wednesday.

The Municipality plans to build the railroad station, perhaps in 2014.

They also want to take the opportunity to establish a bus stop there coming out of San Jose and go to Guanacaste, Puntarenas, North and West Zone in Alajuela (San Ramón, Palmares and Naranjo).

“The place has two advantages, one that is in front of the entrance and exit road to Alajuela, and the other is that the rail line goes right there,” said the Mayor .

Thompson said that the train does not plan to enter the city.

To finalize the project, it is also necessary that the Costa Rica Railway (Incofer) invests about ¢ 6,000 million.

That amount of money is required to rehabilitate the railway line, Thompson said.

Also, the mayor said they plan to build a branch from that station to the airport Juan Santamaría.

This will allow tourists to use the railroad to move to other areas such as Heredia, San José and Cartago.