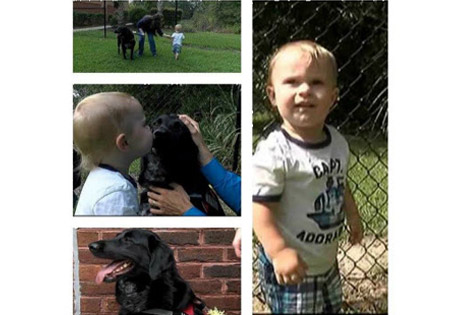 Two parents in South Carolina knew something wasn’t right when their normally mild mannered and playful dog started acting strange toward the babysitter they hired to watch their infant son.

Their dog’s behavior eventually led to the babysitter being convicted of abusing that same child.

Benjamin and Hope Jordan are like any other working parents; they needed to find someone to watch their son, Finn, while they worked to provide for their family.

After moving to Charleston, SC last year, they placed an ad and did all they thought they needed to do to ensure their 7-month-old child would be in good hands, including a background check on 21-year-old Alexis Khan.

The babysitter had been left alone with Finn and their dog, Killian, several times over five months when they noticed something terribly wrong with Killian when the sitter would come into the house.

“He was very aggressive towards her and a few times we actually had to physically restrain our dog from going towards her,” Benjamin Jordon told WTVR News.

They decided to place an iPhone under the couch and record what happened after they left the home. What they heard on the recordings would horrify any parent.

They heard Finn crying and the babysitter telling him to “shut up,” and then slapping noises are heard on the tape. Eventually Finn’s cries turned from distress to pain, according to Jordon.

“I just wanted to reach through the audio tape, go back in time, and just grab him up,” he says.

Khan was arrested a few weeks later and charged with assault and battery. She was sentenced to serve 1-3 years in prison and will be eligible for parole after one year. The former babysitter will never be able to work with children again due to being placed on a child abuse registry.

The Jordons are very happy their dog alerted them to the abuse and say he might have saved Finn or another child’s life.

The family reports that Finn is doing very well and doesn’t appear to have any lasting scars from his five months of abuse.