A Visit to the Perrovida Craft Brewery In Costa Rica

Costa Rica News – Welcome to the ja-ja-ja-jungle Bierdos! This month we trekked to Costa Rica and in between our rollercoaster airport van rides, dodging landslides and man eating crocodiles, racing at break neck speeds on ATVs through the beautiful hills and waterfalls of Jaco Beach, horseback rides into the sunset on the surfing beaches of Hermosa, howler monkeys, snakes and sloths at Manuel Antonio Park and enjoying the copious (and I mean COPIOUS) shots of Chili Guaro and Imperial Silver cerveza we, of course, found a brewery. 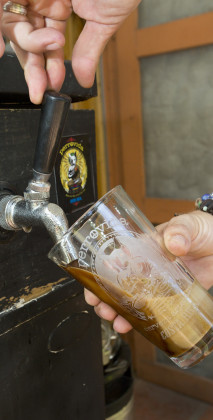 Actually, we stumbled upon this Costa Rican brewery that is literally off the map between Jaco Beach and Quepos. In the jungle, crafted from rainforest water and a little TLC (that’s Tico Loving Care) is PERROVIDA CRAFT BEER (7KM OFF COSTANERA HWY BETWEEN PARRITA AND QUEPOS, PARRITA 11111, COSTA RICA 89603836 WWW.PERROVIDA.CR). So, if you find yourself in Costa Rica drinking with the surfers, ex-pats and locals I implore you to try one and take the road less traveled to PerroVida, aka the dog life.

To get to the brewery, we traveled across dirt roads and makeshift bridges, in the dark up a jungle mountain. Just as we were about to give up, we saw the large banner outside a small house at the end of the road, PERROVIDA! – we had made it. Partner/owner Mick Gutierrez greeted us like family and took us to his brewing shack. We traded stories and brews while his motley pack of friendly dogs raced around our feet. Certainly it was the dog life and as fate would have it Mick turned out to be from Arlington, VA (Ballston to be exact). His father owned property in CR and he came out to start a new laid back life in the sprawling beauty of Rainmaker Park (trails, suspension bridges, waterfalls and more), but he always had a passion for brewing. When the CR government passed new legislation allowing craft brewing permits he (and partners Kyle Kersey and Paul Peck’s) home brew operation became one of a handful of newly emerging craft breweries in CR (and from my entirely local “research” coincidentally also the best).

We ran into Mick a few more times outside the jungle as he hand delivered beers, grabbed supplies and rep’ed his beer bar-by-bar in his little pick-up truck, surely a labor of beer love. So keep on trucking bierdos for good beer and if you’re in CR try these PerroVida brews—and quite frankly you’re welcome for the best trip advice that I didn’t get from TripAdvisor.

MANGO MAE HEFEWEIZEN 5%: A light, crisp, and refreshing malty beach brew with fresh, local, mouthwatering mangos from the jungles paired with white wheat. This was the girl’s favorite, but I can attest it was top beer for the dudes as well! 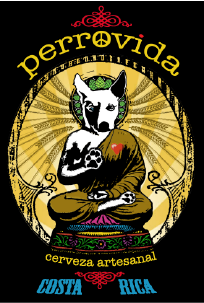 RATING: Mae-by the best and only Mango beer I’ve ever had!

PINEAPPLE WHEAT 5%?: Seasonal Pineapple Wheat beer. Just think of your favorite Hefeweizen and add fresh squeezed pineapples. I honestly hate pineapples BUT loved this beer. I probably drank 10 of these at the Green Room in Jaco alone and it was by far my favorite of the bunch! RATING: Pine-ing after this beer. I miss you sweet nectar of the pineapple gods. If you can find this beer, you’re in BEER NIRVANA dude!

ZAGUATE (OR STREET DOG) 60 MINUTE IPA 6.2%: Dogs ran amuck in in CR so this is a tribute to our furry homeless friends (often cared for by wait staff in town). It’s a hoppy IPA that’s as animated as these little fellas. Solid. RATING: Doggone good beer/Hoptastic!

BLACK BETTY BLACK IPA (BAM BA LAM) 6.2%: Dark, but light bodied coffee flavored IPA that has a lot of texture/flavors going on underneath that dark roast coffee exterior. RATING: Hard to put a finger on, but one hot Betty if you ask me!

MASSIVE MASTIFF BLACK IMPERIAL IPA 10%: Boozebomb that’s a smooth operator so be careful of the ABV, but the chocolate and coffee flavors are straight money (“Yeahhhh Boyyyy”-Favor Flav). Not something you’d expect in the middle of the jungle, BUT then again it was paradise and Mick doesn’t mess around. RATING: Stiff competition for other area beers. #Massive is right!