It has become a cliché to say that the solution to the European economic crisis is political integration. Like most cliché’s, that’s a misleading half-truth. Allow me to address the European predicament at the foundation—the psychological and spiritual level. Just as economic policy without political direction is a ship without a rudder, political policy without fundamental insight and vision inevitably runs aground. 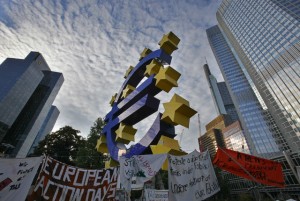 From across the pond, it seems to me that the first question Europe needs to answer is not whether or what kind of country it will be, but what is “the United States of Europe’s” place in and relationship to the global society?

If you like paradoxes, as I do, this one is a beauty. The world is so interconnected and interdependent now that to say Europe does not exist in isolation sounds redundant. The paradox is that the unification of Europe cannot occur in the reality of our present historical context without first looking to humanity as a whole.

Yet our disappointing conventional president intones conventional thinking in repeating: “The solutions will be debated and decided by the leaders and the people of Europe.”

It’s common to hear politicians in the United States say that “Europe punches below its weight.” But Washington doesn’t want Europe to become a heavyweight contender in terms of global leadership.

Though it’s inconceivable that a United States of Europe would try to compete militarily with the United States of America (which has a monstrous military twice the size of all other militaries in the world combined), Europe can and should compete on the field of ideas and leadership.

However if Europe continues to focus on its internecine struggles, rather than on what a new and United Europe would look like and mean for humanity, unification will continue to be a pipe dream. Obviously, Europe needs a unifying vision of what Europe could be to the world.

In all of Europe, are there no more compelling leaders than the sharp-elbowed technocrat Merkel, the plodding functionary Barroso, or the hamstrung ideologue Hollande?

That’s not a call for the ‘strong leader’ solution of the past, with all its latent potential for evil, but simply pointing out the necessity of a clear and convincing voice of insight, vision, and reason. 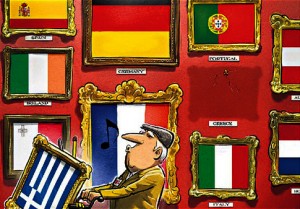 Barack Obama. What we got instead was a simulacrum of passion, the emptiness of reason without insight. Obama ran his transformation con game precisely at a moment when the passion of insight was most urgently needed to infuse the spent evils of the Bush era. Instead he drove the last nail into hope’s coffin in America. And now the hounds of hell are back at the door, fronting an even more malleable lapdog in Mitt Romney.

Of course, in hindsight the Obama con was inevitable given the rapid decline of America, the erosion of anything that could be called character in its people, and the willful devotion by our media to satiating the superficial whims of a celebrity-oriented culture that even sickens people here in California.

So will Europe break free of America’s dead-end globalizing culture (not to mention passé French pretensions and soulless German pragmatism), and chart a new course? The prospects don’t look good at present, since Europe remains self-absorbingly in America’s thrall.

Indeed, there seems to be almost as much numbness there as there is here, differentiated only by thick layers of tradition and sophistication. It’s amazing to think that there are still people in the world, especially demonstrably in the Middle East these days, who actually feel: “Give me liberty, or give me death.”

Given our interconnected histories, can the last ember of America’s revolutionary spirit find a ready hearth, and ignite what life remains on the Continent of our birth? Wouldn’t that be an irony of history?

Can the USE (really?) be the first confederated country to lead in the only way that now matters—with respect to the common challenges urgently facing humanity as a whole? Such a question sounds ludicrous in our cynical age, but there it is. 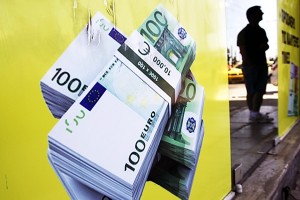 Let’s take the critical question of what to do about a country banging at Europe’s back door—Iran. Recently I heard US Secretary of State Hillary Clinton laughingly agree with the Mephistophelian James Baker when he said: “At the end of the day, if Iran does not comply and end its program to gain a nuclear weapon, we should take them out. And the United States is the only country that can do it. Israel can’t.”

There you have it.

By what right does the United States claim such authority to go to war against Iran? By the ancient right of military power, which holds that might makes right—with much less intelligence in its use than Cyrus the Great. Given America’s recent track record in Iraq, how will Europe respond? Can it respond?

The European conundrum is the same one that confronts all peoples in our de facto global society: How are the old national identities to be woven into a workable global polity and its subsets? Obviously, the patriotic citizens of the nation-states of Europe cannot combine into single country anymore than the patriotic citizens of the city-states of Renaissance Italy could combine into a modern state.

The future of humanity is too important to be left in the hands of increasingly irrelevant leaders of fading and failing nation-states guided and driven by national interests, rather than the interests of humanity. And international institutions, as manifestations of nation-states, are looking more and more like boils on the world’s body politic.

Democracy depends on the caliber its citizens, but very few thinkers are attending to what it means to be a good citizen in the new global context.

In the end, the urgent necessity is not for some political program that magically unites a disparate and divided Continent. The urgent necessity is for ordinary people all over the world to hold their beliefs, opinions, traditions, and even knowledge in abeyance, and hold the space open to question and awaken insight together.

That action, taken at the spiritual, philosophical, and political levels, will ignite a revolution like the world has never seen. Let it begin in Europe.

Nearly Half of CR Schools are Younger than Their Students