San Jose, Costa Rica – An earthquake of 5.3 magnitude on the Richter scale struck at 6:45 pm today the southern Pacific coast of Costa Rica. 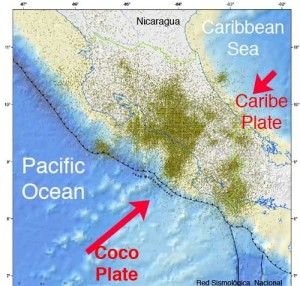 The preliminary report of the Volcanological and Seismological Observatory of Costa Rica (OVSICORI) located at 21 kilometers southwest of Puerto la Playa, in Golfito, Puntarenas. According to their seismographs, the movement occurred within 21 kilometers deep.

However, the National Seismological Network, reports that the movement occurred 130 miles southwest of Puerto Jiménez from Golfito. With a magnitude of 5.7.

“This earthquake has been reported as felt moderately in the south and slightly in the Central Valley. This earthquake occurs in the area of large fault system that forms the Panama Fracture Zone that is the boundary between the Nazca and Cocos plates, “says the report.