Well Lady Laura you dismiss Karina Bolaños overnight for not doing anything but make a tape and you have people still working in your government that are corrupt and unethical that still remain in their positions. How do you explain that? In the last three and half years, there have been 47 cases in which the Office of Ethics found possible faults in the performance of public officials, only seven have resulted in a penalty. 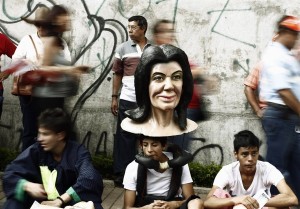 Of these, 14 remain active, but with an average of 16 months without being processed are resolved. Even some have almost three years since they were presented without the date may have been concluded.

The most recent of those cases staged as Vice President Luis Liberman and Education Minister Leonardo Garnier.

They are the Attorney ethical lapses blamed for having issued letters of recommendation for the consultant and president accessory Florisabel Rodriguez would use it to compete for a contract Recope.

The President of the Republic, Laura Chinchilla, opposed the report of the attorneys and, after a legal analysis, acquitted both officers on July 7.

In recent weeks, The Nation investigated the fate of the 47 reports issued by the Office since 2009.

In these cases, prosecutors investigated 63 officials from 30 different institutions.

The most common charges are violations of the duty of probity (honesty and good faith in exercising their functions), with 27 people listed, breach of obligation of abstention and negligent advice.

In 45 reports, the Ombudsman recommended that the authorities examine the opening of administrative proceedings against two-researched and targeted to PANI and INVU – called for action to amend illegal acts.

In ten cases, the institutions did not open the process, either because employees exempted, because they left their job or because the entity was declared incompetent to solve.

The Governing Council is the entity that issues left over without investigation: two in the current administration and one in the Oscar Arias.

In 30 cases, the institutions themselves opened a case against the accused. Only seven of these processes have resulted in a penalty.

Among punishment three firings, a written reprimand and two suspensions, mostly for breach of obligation of probity. As a case in Recope, the organization declined to specify the penalty.

Meanwhile, the Bar acquitted one of its members, who had been denounced by Jorge Chavarria, mayor of Santa Cruz, Guanacaste, on the recommendation of the Attorney.

What happened to all other procedures were opened?

Eight ended with acquittals, its amount is still pending, three were abandoned, filed two unresolved and three more are suspended for unconstitutionality filed by the investigation.

Attorney General of the Republic, Ana Lorena Brenes, questioned the ability of the Public Administration for administrative procedures.

Since 2009, the Office has received 482 complaints of ethical misconduct of state employees.

Handled 434 cases and rejected 404 complaints of unfair or do not apply to you. Issued 47 reports designed to punish officials and 42 shares of recommendation guidelines for improving ethics and transparency.

5 Reasons You Should Be Excited About Mars Today