World News – They are ordinary people making an extraordinary journey. A 68-year-old band teacher from Texas, a retired fire captain from California and a just-engaged construction contractor are among hundreds of competitors setting off Monday on the grueling Clipper Round the World Yacht Race.

Water tornadoes, 80-foot waves and gale-force winds are just some of the wild weather hazards faced by the mostly amateur sailors during the year-long trip across the world’s most treacherous seas.

Each of the 12 teams contains a professional skipper to lead the identical 70-foot Clipper boats along the 40,000-nautical-mile route of the world’s longest ocean race.

However, 40 percent of those taking part — including the eight Americans — have no previous sailing experience and needed to undergo a rigorous training course over several weeks.

Two South African competitors had never even seen the sea before signing up to what organizers call “an endurance test like other.”

“After this,” they promise, “nothing will ever be the same.”

“It’s human will against nature,” said yachting legend Sir Robin Knox-Johnston, who became the first person to sail solo non-stop around the world in 1968-69.

He founded the Clipper race in order to open up the oceans to all walks of life.

“The easy choices in life often offer no pleasure; it is the hard and difficult challenges that bring the satisfaction of real achievement,” Knox-Johnston added.

Texan Linda McDavitt is the oldest woman competing in the race, and will celebrate her 69th birthday at sea. She has been building muscle strength with pilates and pole-dancing classes. As her team’s rigger, she will regularly be hoisted nearly 100 feet up the mast to make sail repairs. “You’re never too old to do anything you want, you just have to have the spirit,” she told NBC News. “Just get out there and do it!”

The 10th Clipper race began pleasantly enough in London on Sunday with a carnival-like opening ceremony and a parade under the iconic Tower Bridge on the sheltered waters of the River Thames. 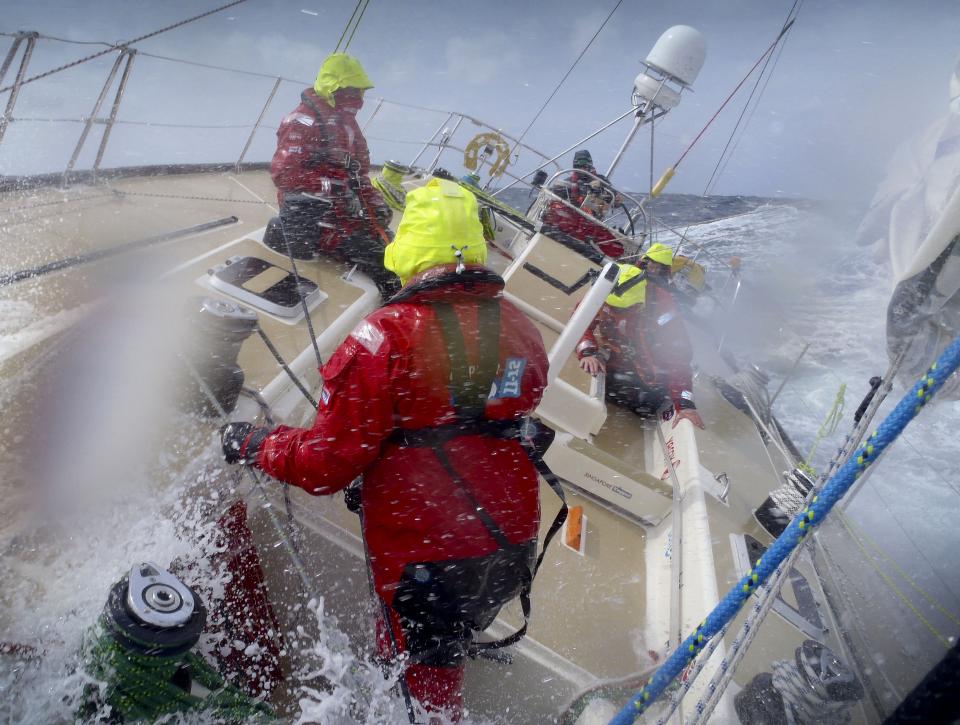 But as the race gets underway, competitors will be soaked to the skin, sleep-deprived and can expect to burn an average of 5,000 calories a day.

Life below deck is also extreme. Racing sailboats achieve maximum speed when tilted on their side, at a 45-degree angle. Crew members will live sideways in cramped quarters, needing to strap themselves into bed for safety. Showering will involve bringing a bar of soap up to the deck when a rain shower passes overhead.

He proposed to his fiancée just before joining the race and plans to get married when it’s all over. “My game plan is to stay in touch, it’s gonna be hard,” he said. “She’ll visit me three times during the race, about three months apart each time, so we’ll have a few opportunities to go over guest lists or … planning or whatever she’d like to talk about. I’m not going to talk about flowers, though!”

The age range in this race runs from 18 to 74 and includes 44 nationalities.

Among them is a math teacher from London who applied after drawing up a panicked “bucket list” as she approached her 30th birthday. Noreen Rahman, now 32, faces an extra challenge: as a Muslim, she wears a headscarf and needs to pray five times a day.

Rahman wants to inspire her female students to believe their religion does not prevent them from sailing. “I’ve got my headscarf on, I’m going to do my prayers … go forth, the world is your oyster!”

Other competitors pushing themselves to the limit include British 27-year-old Gavin Reid, who is deaf. Since even the most advanced hearing aid cannot remain waterproof in such extreme conditions, he must rely on the patience — and ingenuity — of his fellow crew.

“They’ve come up with loads of ideas to support me,” he said. “I’m having a buddy system at nighttime so I will always have someone right next to me, relaying all orders to me. One of my crew members came up with the idea of glow in the dark lipstick so I can lip-read at night time.”

What unites all 700 competitors is a very real risk of falling overboard. In the last race, a British sailor spent 99 minutes in the stormy Pacific Ocean before being rescued.

“The sea does not distinguish between Olympians or novices,” the race website warns amateur race applicants. “There is nowhere to hide. If Mother Nature throws down the gauntlet, you must be ready to face the same challenges as the pro racer.”

Despite the risks, many are fulfilling a lifelong dream.

His job meant he often spent time with patients who were close to death. “As I would transport them from the hospital or wherever they were going … you would hear from them so many times ‘I wish I had’ or ‘I was planning on doing this and I didn’t…’ and I swore to myself from the age of 21 that I wasn’t going to be one of those people.”

He hopes his grandson Jayden, 11, will be inspired by his participation. “I hope … at some point in his life he takes from [this that] you grab your dreams and you go after them,” Wilson said.

By by JAMIESON LESKO, NBCNews.com

An Interview with Butch Patrick aka Eddie Munster