Costa Rica News – Warning the photos below are graphic and need not be seen by children under 18. 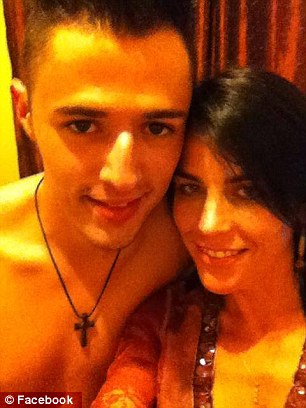 This is the Costa Rican toy boy lover accused of murdering US aid worker Sondra Lynn Elizondo – stabbing her 15 times in a jealous rage.

Shirtless Alejandro Obando Vega, 24, has been arrested and held after Elizondro’s lifeless body was discovered in a San Jose hotel room.

Their romance – which reignited every time Elizondo visited Costa Rica from her home in Merritt Island, Florida – ended tragically on Wednesday when her young lover allegedly launched a frenzied attack on her in a hotel room they were sharing at Casa 69.

It’s believed her killer held a pillow over her face before stabbing her repeatedly leaving wounds to her neck, face, chest and shoulder.

Costa Rica’s Judicial Investigation Department (OIJ) – the equivalent of the FBI – are investigating the theory that Elizondo was killed after threatening to leave Obando after they began arguing over his jealous and controlling behavior.

And in another Daily Mail Online exclusive we can reveal gruesome crime scene photos showing the bloody aftermath of the violent knife attack.

The photos, obtained from a source close to the case, show the blood soaked mattress and pillow of the bed where Elizondo’s body was found.

The blood drenched sheet Elizondo was lying on was removed by police along with her body.

Obando allegedly stole several items from the safe inside room 16 at Casa 69 – a tiny boutique hotel in San Jose’s Barrio California neighborhood – as well as from Elizondo’s luggage.

A maid discovered the body at around 11:30am last Wednesday morning and immediately alerted police.

Jimmy also revealed Elizondo had planned to end her relationship with Obando – known as Ale to those who knew him.

He said: ‘Sondra confided in the family that she was going to end her relationship with Ale. She had told my mother and my cousin.

‘That guy was her boyfriend and when she ended the relationship he (allegedly) killed her and for us it’s a huge loss, it’s very hard, because she was a great person whom we loved so much.

‘Ale Obando Vega is the one that has been arrested and is the main suspect.’

Local police have confirmed the identity of the suspect to Daily Mail Online.

Student Jimmy, 27, said Sondra would visit her sister, his mother, every time she came to Costa Rica to carry out work with her charity Vida Volunteer.

‘She would visit the family at my mother’s house in Cartago,’ he said.

‘The family knew about her relationship with Ale. But she kept the relationship away from us. We saw them together a couple of times, but she admitted it wasn’t love.

‘I only really saw him to say hi to, so I don’t really know much about him.

‘All I know is that the family never thought something like this would ever happen.’

Jimmy, who is currently studying tourism at university, added that Sondra and Obando had known each other for around two years.

He said Sondra had lived in Cartago, the town where Obando is originally from, for many years, raising her children there when they were young, so had many connections to the area.

It was in Cartago where she founded her charity.

He added: ‘I don’t believe that she was in love with Ale. She would only see him when she would come by the country.

‘When I spoke with her before she died, she told me she was not in love with Ale, her priority was always the family.

‘It was a relationship of convenience, they had a mutual agreement that when she felt that she no longer needed him she could stop the relationship. But Ale could never accept this.’

On his Facebook profile, other than the one photo alongside Elizondo, Obando posts several photos of himself in various poses.

On his Facebook wallpaper Obando strikes a suave, almost model like pose while leaning against a wall and jokes underneath: ‘I’m going to be an actor!’

A friend comments: ‘So sexy!’ 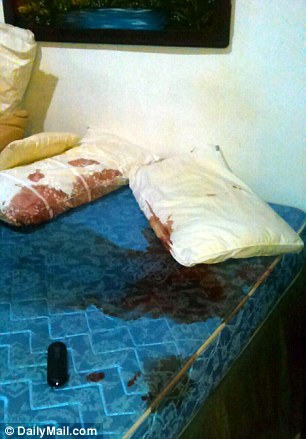 In some snaps he sports a goatee beard and others he has sky-scraper style spikes in his hair.

He also posted likes for David Guetta and a local Cartago band called Flashback and a film called The Punisher.

It’s not clear what Obando does for a living but he says he is from Cartago and studied at Liceo Enrique Guier Saenz, a school for the Arts.

On his sister’s profile Obando appears on several photos alongside his sibling and his mother.

In one shot he’s wearing a vest exposing a large tattoo on his right shoulder.

Daily Mail Online has learned that Obando has traveled over to Florida to spend time with Elizondo.

The mom-of-two would see him during each trip to San Jose every few months where she carried out aid work.

Elizondo also liked to bring her young lover gifts from America when she visited.

And according to a source close to the investigation the pair seemed very much the happy couple when they first arrived at the $35 a night hotel on December 5, holding hands during nights out.

But, according to the source, staff also noticed that Obando appeared ‘jealous’ and ‘controlling’ over Elizondo.

The source said: ‘The workers told police the woman was very friendly and sociable, she spoke to many other people at the hotel.

‘Her companion didn’t like that, he seemed jealous, demanding and controlling, he didn’t appear to like her talking to anybody, he seemed upset when she did.’

Obando was arrested on Thursday – not Friday as has previously been reported – in a supermarket in the town of Goicoechea, just outside Costa Rica’s capital San Jose.

The spokesperson said: ‘The suspect was arrested in a public area of Guadalupe town, outside of San Jose, on Thursday December 10.

‘On the same day OIJ investigators were allowed to search the house of the suspect located in Coronado and were able to obtain personal belongings of the victim.

‘We can confirm that the suspect who was arrested and the now deceased female had an informal sentimental relationship going back a couple of years.

‘The person detained was taken in to custody and turned over to The Public Ministry, which imposed on him a three month preventative prison sentence.’

According to the office of Costa Rica’s Attorney General, Obando, accompanied by his defense lawyer, opted not to make any statement during his first court appearance.

A spokesperson said: ‘In Costa Rica there is a right given to anyone being accused of any crime to opt either to talk or keep silent.’

Elizondo was the co-founder of Vida Volunteer, an organization that provides free medical and dental care in needy communities in Costa Rica, Nicaragua and Guatemala.

Elizondo’s brother Greg Payne, 51, told Daily Mail Online last week that he could barely speak after finding out that his sister was dead.

He said: ‘We just can’t believe that a horrifying thing like that happened.

‘She’s a great person, a great humanitarian. She was always thinking of others.

‘She spent her time between the US and Costa Rica, she was mostly here. She went down there whenever she needed to.

‘She started Vida Volunteer because she saw the need for it. Other people weren’t getting to the areas she did so she went ahead and did it.’

A statement by Vida on Facebook, read: ‘Sondra was a devoted mother, loyal friend and caring daughter.

‘She was a great inspiration and always passionate about helping others and making a positive difference.

‘Vida Volunteer is the legacy Sondra leaves behind and we are more committed than ever to keeping her dream alive.’

By RYAN PARRY, From Daily Mail

How to Give Your Social Media Feed a ‘Star Wars’ Makeover