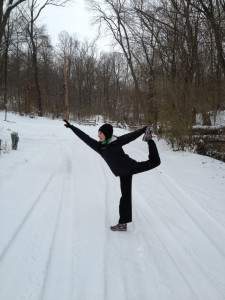 Hand stands are not recommended, says Lynda Kennedy, owner of Yogachelan, a yoga studio in eastern Washington state where winter temperatures often hover in the 20s. But there are many other traditional poses that can be adapted to the movement, with the goal of calming the mind, preparing the body for a mountain experience or simply being present with nature.

Kennedy, who also leads summer classes combining yoga with ziplining, river rafting and paddleboarding, takes groups out on snowshoes for three-hour sessions that start with mild stretching, progress to standing poses and end with a half-hour practice at her snowga “studio,” a flat piece of land overlooking a valley and a 50-mile-long mountain lake.

Along the way they might try the “lotus” pose, a posture that involves sitting cross-legged in the snow, or experiment with synchronized movements that call for everyone to lie on on their backs, alternating between drawing their legs together and extending them.

Kennedy packs along hot tea and extra scarves and mittens. Later in January, she plans an outing that will combine a yoga practice with a snowshoe walk and wine-tasting at a local vineyard.

“What I want to do is bring yoga to people who would not normally try yoga,” she says. “If combining yoga with snowshoeing might make them try it, then that’s what I’m working towards.”

Julie Jean, 65, who lives just outside Chelan, Wash., was new to both when she first gave snowga a try.

She describes the poses as “simple rather than power things.”

“The snow is very forgiving,” says Jean. “If you lose your balance on any of the moves, and topple over, nobody gets injured. It’s like doing an unplanned snow angel.”

Meditation in motion is what Anne Anderson, a professional ski instructor and yoga teacher, said she had in mind when she developed the snowga concept a few years ago, set up a Facebook page and offered 90-minute classes at the Mohawk Mountain ski resort in Connecticut.

“The yogic breath and movement can be integrated into many sports and recreational activities to improve awareness, oneness and mindfulness,” she says.

Anderson, who has since moved to Northern California where she is hoping to build interest at West Coast resorts, said she came up with the idea as a way of helping skiers and snowboarders overcome their fears.

At Mohawk, Anderson would gather students in a circle for “snowgic” warm-ups before they stepped into their skis or snowboards. They’d practice spiral twists and postures such as the “warrior” pose, designed to increase confidence and the “triangle” pose, aimed at opening the joints.

On the slopes, she advises practicing “chair” pose, a yoga posture similar to a racing tuck in skiing. Also, “mountain” pose, a posture that calls for centering the body over the skis and raising the hands in a balanced stance.

In the meantime, she encourages anyone who practices yoga and snow sports to experiment on their own in blending the two.

“It’s really all about getting interconnected with your surroundings,” she says.

“One of my big techniques is ‘serpent’s breath,’ good for oxygenating the blood and increasing internal body heat,” a technique that comes in handy on chilly chair lifts.

Only in Costa Rica for Week of January 13th