If I have to hear or see “YOLO” one more time, I’m going to rip out my eyes and ear drums (not really, but I’m a big fan of hyperbole). For those of you have been locked in a closet with no internet all year, YOLO is an acronym for “You only live once.” 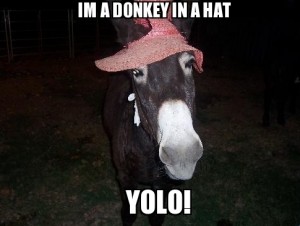 I must admit, I initially fell victim to the allure of “YOLO.” Have I uttered this word aloud? Yes, yes I have. I admit to you, dear readers, I even had a “YOLO” themed weekend. You’ve got me. I mean, look at how funny this meme is! I couldn’t help myself! I fell for “YOLO” initially, along with the rest of online America.

And boy, did America fall hard. It is printed on shirts, Zac Efron has a tattoo with the acronym on his hand. A lot of other randos have it tattooed on them as well. Hipsters have started saying it out loud in yet another effort to maintain irony. It was short-listed for the 2012 English Word of the Year by the Oxford American Dictionary. On a much more serious note, it even resulted in the death of a young aspiring rapper, Ervin McKinness, who tweeted, “Drunk af going 120 drifting corners #FuckIt YOLO” minutes before he died in a fiery one-car crash.

But this travesty of a ‘word’ (I’m going to count this acronym as a word, because people actually say “YOLO” out loud, but I suppose it’s technically four words) NEEDS to stop. Any acronym that is used as much as this one is bound to be MISused and OVERused.

But where did YOLO even come from? And why has it gained so much momentum this year?

According to KnowYourMeme.com, the earliest pop culture use of the YOLO acronym is attributed to Adam Mesh on the third season of NBC’s reality show “Average Joe” (yikes). Mesh launched a YOLO clothing line in 2004.

In July 2006, the band The Strokes came out with a single called “You Only Live Once.” They then launched “Operation YOLO,” asking fans to request their song on American radio stations.

However, the person we REALLY have to thank for this trend is Degrassi star-turned-rapper Drake.

Then, Drake’s single “The Motto” played on the radio on Halloween 2011, with the official music video following on 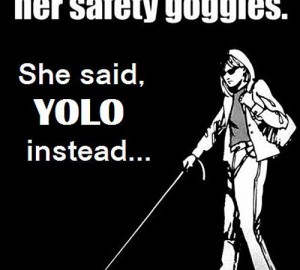 Look, I love Degrassi as much as the next human being, but Drake can’t be for forgiven for this atrocity. He created the “motto” of 2012: YOLO, perhaps the dumbest phrase to live by of all time.

So, let’s get to usage. There are essentially two ways that a person can use YOLO: ironically or as as a way to be nonchalant about doing really asinine things.

Example 2 (a way to be nonchalant about doing really asinine things): Trying heroin for the first time at my friend’s house #lol #yolo

I imagine by now that you get the hang of it.

You know, the first example was kind of funny for awhile, but it got old after about eight months.

The second example just doesn’t make any sense. If we truthfully only live once, then why would you endanger your life by doing really stupid things that could kill you?

YOLO has definitely received a backlash, but it’s not enough to kill the word altogether. So, come on, y’all! I need your help. Don’t enable the use of YOLO among your friends, family and other loved ones. You hear a coworker jokily say “YOLO” when mentioning expense reports? GIVE THAT MAN THE DIRTIEST LOOK YOU CAN MUSTER! A friend says “YOLO” when talking about how smashed she’s getting this weekend? SHUT HER DOWN! We can do this!

Here’s to the disappearance of YOLO in 2013. Do you agree? Leave a comment below with your thoughts or tell me which word YOU hope will die in 2013.