Costa Rica News – Although no one gave Costa Rica much of a chance against the #7 ranked team in the world Uruguay, they pulled together and in my opinion pulled the biggest upset of the World Cup tournament in Brazil so far. 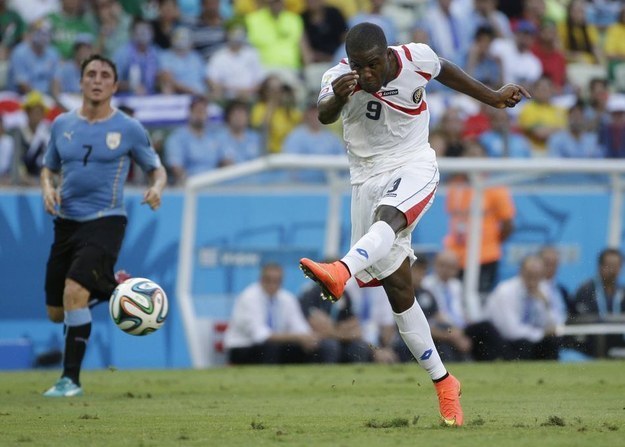 Uruguay struck first when a questionable penalty kick was awarded and Edinson Cavani (Uruguay) converted the penalty with a right footed shot to the bottom right corner.

The first half ended with Uruguay on top 1 to 0, but Costa Rica came out focused and determined in the second half of the game.

In the 54th minute Joel Campbell (Costa Rica) left footed netted shot from the center of the box to the center of the goal. The only thing that was bothersome was his obnoxious celebration after the equalizing goal.

Just 3 minutes later Christian Bolaños placed a perfect ball from a set piece situation to the head of Oscar Duarte, which was headed into the bottom right corner of the goal.

Finally in the 84th minute Costa Rica put the game away. Marcos Ureña (Costa Rica) broke away and netted a right footed shot from the right side of the box to the bottom left corner of the goal. He was assisted by Joel Campbell with a through ball which the speedy Ureña placed perfectly past the goalkeeper .

Maxi Pereira (Uruguay) is lost his head and kicked Campbell in extra time and will have to sit the next World Cup game.

These three points are huge in the tough Group D. Costa Rica takes on Italy Friday the 20th at 10 am Costa Rica time.

Costa Rica controlled the second half and brought pride and happiness into the hearts of all those in the land of Pura Vida!

Reaping the Whirlwind in Iraq

How Much Police Corruption is There in Costa Rica?