World News – Wearing glasses and a blazer, dancing at 4:30 a.m. in an empty newsroom to Kanye West, 25-year-old Marina Shifrin announced to her boss — and most of the Internet — that she was quitting her job at a Taiwanese animation company.

It’s a risky strategy, but in today’s fast-paced, social media-fueled economy, quitting via viral video isn’t the career killer it might once have been.

“My first thought is, it’s going to be there for the rest of her life, so I hope she thoughtfully considered that, but I do give her props for recognizing at such a young age that she’s responsible for managing her career,” said Elene Cafasso, founder and president of executive coaching firm Enerpace.

Video of Marina Quitting Her Job

Shifrin started working for Next Media Animation in March 2012 in the United States, then moved to Taipei in November. Although she had been planning to leave the company in about a month anyway, when her year-long contract was up, the video accelerated her plans.

“Obviously the management isn’t really thrilled with me right now,” she said. 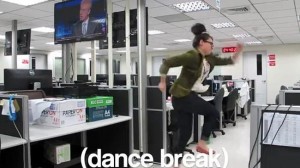 After making the video last week, Shifrin initially shared it with some friends and her parents, then made it public on YouTube and emailed gossip site Gawker with the link after a disagreement with her boss.

“I knew if I put up this video it would kind of force me to a more creative career path,” Shifrin said. “I really wanted to ramp up my stand-up [comedy] career.”

Carol Vernon, principal of executive coaching firm Communication Matters, said Shifrin’s unusual way of giving notice “will brand her. Depending on what kind of work she’s looking for, this could hurt her [or] could help her.”

Although Shifrin calls Next Media Animation an “awesome company” in her video, she complained in it, “My boss … only cares about quantity and how many views each video gets.”

Her now-former boss, Michael Logan, responded: “I do care about views, because advertising pays the bills … but that doesn’t mean I don’t care about quality.” Logan, director of content development for NMA’s international news division, said in an online chat, “We gave her assignments and opportunities to be creative. She never took them.”

Internet commenters are divided on Shifrin. To some, she’s a folk hero; to others, an example of the entitled millennial generation.

“I thought about that a lot before I posted this video,” Shifrin said. “I started working when I was 13 as a babysitter and I’ve always had like two or three jobs … but our generation is seen as lazy. What’s the line between us being brats and expecting a perfect job or expecting praise at work or expecting to be just respected? We just get such a bad rap.”

So, where could Shifrin expect to work now?

“I think a company could be afraid of the publicity they’d get if they hired her and she decided to do a video about them,” said Enerpace’s Cafasso. “Other companies, depending on their cultures and their brand, might appreciate that she … stood up for herself. It would have to be an edgy company with a culture that would applaud that kind of initiative.”

At least one entrepreneur isn’t deterred by Shifrin’s unorthodox departure. “Some people saw that video and were defensive and felt threatened [of] someone bursting with creativity you might not be able to control,” said Scott Gilmore, CEO of Building Markets, a foundation that helps businesspeople in economies disrupted by war or other conflict. “We saw it as a celebration …. You get the sense actually that she loves elements of what she’s doing.”

Gilmore said he had already been in contact with Shifrin and was trying to figure out if there was a role she could play at his company. “Clearly, she’s a woman that is creative and has a lot of energy …. We’ve all been in positions that weren’t right for us. There’s nothing wrong with quitting your job. Life is short.”