Costa Rica Entertainment – Would you lose your grip or lose your pants? This woman chose the latter in Costa Rica.

THIS is the hilarious moment an unfortunate thrill seeker finds herself in an embarrassing position after an amusement park ride flings off her pants.

Festival goers were braving the violent vibrations of La Tagada, a disk that spins and throws passengers around, at a fairground in Costa Rica.

As the ride bucked and twisted, the turbulence proved too much for one woman when her pants began to slip off, leaving her desperate boyfriend to protect her modesty. 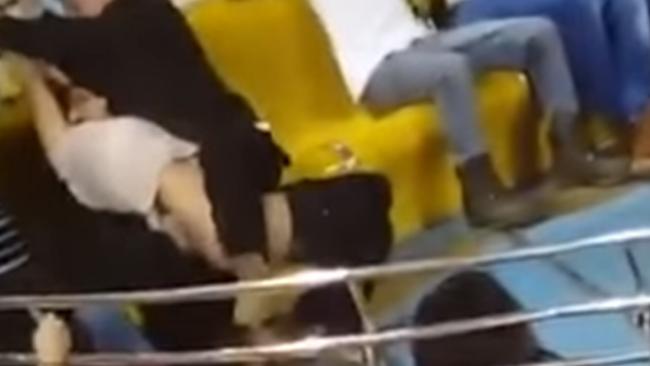 To add to the desperation, the woman wasn’t wearing anything underneath her pants, which neither her nor her boyfriend could quite hold on to.

The couple’s efforts to defend her dignity were all for nothing when the unlucky lady was hurled forward into the middle of the wildly spinning disk with her jeans round her knees and her bare bottom showing.

The ride was swiftly stopped but the crowd of cheering onlookers had already seen everything, while one quick thinking punter managed to catch the whole ordeal on camera.

The incident happened at Costa Rica’s Zapote Festival in the capital San Jose, a traditional end-of-year festival which attracts tens of thousands of people every day.

Unfortunately for the unnamed woman, the footage of the ordeal was swiftly uploaded to YouTube had already been seen by over 40,000 people this morning.