Costa Rica News – Over the past week of so the world has been hearing the threats from Daniel Ortega that he is going to take back the Guanacaste area that has been a part of the country of Costa Rica since 1824.  He wants to use this area for oil exploration. (At the end of this we will name a few funny reasons a Costa Rican army would not function) 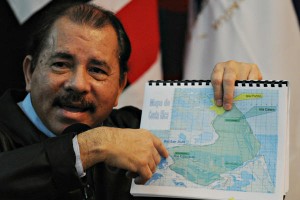 Laura Chinchilla is making this worse by even paying attention to these threats by Ortega.  Look if he actually got the troops to try to invade Costa Rica it would cause the USA to send troops down to Costa Rica and the threat would be over in about 48 hours.

It seems that every five years or so there is some conflict between Costa Rica and Nicaragua. The former Nicaraguan Foreign Minister Francisco Xavier Aguirre Sacasa previously said that the ongoing clashes are “over the San Juan River.” This time it goes further than that.

Nicaraguan President Daniel Ortega is closely tied to unpopular countries like Venezuela, Cuba, and Iran. Because of this he is seen as threatening to neighboring countries. He has been making threats about reclaiming territory from Costa Rica as well as building a new inter-oceanic canal which would rival the Panama Canal. No one has really taken him too seriously, though he did get some spotlight when he announced Iran and China would back the canal financially. If a rival canal would be built along the San Juan River (in Nicaragua and land they hope to get back from Costa Rica) that would have worldwide implications. The rouge state of Nicaragua is already known to transport drugs on this river. Right now we have the stable state of Panama intercepting suspicious Nicaraguan inter-oceanic cargo, such as stopping missile parts that were headed to North Korea.

The world seems so preoccupied with failing economies, wars, and rebellions in Egypt and Syria that it’s not making anything of Ortega’s threat a few days ago to appeal to the world court to recover the Guanacaste province. Will there be conflict on this land? Will it go to the court? Will other countries need to intervene? In 2010, Costa Rica appealed to the International Court of Justice regarding Nicaragua violating its wetlands on the Caribbean side. They ruled that Nicaragua be blocked from entering them.

In 1824, the people of Guanacaste legally elected to be part of Costa Rica, though Ortega claims it wasn’t until 1856 that Costa Rica was given Guanacaste after defeating William Walker.  Weather Nicaragua gifted Costa Rica with Guanacaste as a reward for saving them from becoming a slave state or the people elected to become part of Costa Rica is not important because in either case Costa Rica didn’t illegally take over the territory. It was obtained legally in one way or another, so it is not “recoverable.” It is believed by some that Ortega is making this ridiculous appeal for economic reasons. In addition to wanting to build a second canal, along the old border there is a river where oil was discovered in 2011.

Now that we have all this out of the way let’s name a few funny reasons why Costa Rica could not have an army: (Yes These are stereotypes and do not apply to everyone, so do not get your panties in a bunch)

2. Members of he army would have to follow instructions every time from superiors (good luck)

3. The Costa Rican Non-confrontational personas (soldiers would need to drink or go get 8 friends before they had the balls to go to war)

4. The guys would have to live away from their mothers (we all know most tico guys live with mommy until they turn 30 or older)

What makes you laugh when you think of a Costa Rican army? post in the comments below