Why I Choose Costa Rica Over Mexico

Costa Rica Travel – Beautiful white sand beaches, gorgeous sunsets and sunrises, palm trees, and fresh fruit…these are things that remind me of Mexico. I used to travel there every year, sometimes twice a year growing up – I even lived there for a school semester during college. I loved the climate, the people, and the adventures of this country. 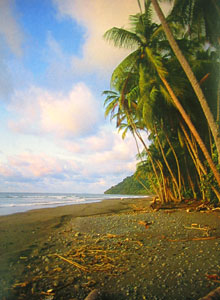 Costa Rica was the perfect place. An amazing 27 different climates in such a small country, you have the cloud forest where it actually isn’t too humid during the dry season, there are the coasts that remain around 80 degrees if you like fun in the sun, and then there are the adventurous aspects of the country; zip lining, horseback riding, and river rafting. The food is fresh and delicious, (I actually lost about 5 pounds over a three week period) and the most amazing thing is that you can drink the water! Yes, right out of the faucet the water is safe to drink!

I had been on hiatus from a Mexico vacation for almost 10 years. Recently, we decided to give it another whirl for the holiday season. When we recently visited I got a rude reminder of how corrupt this government is and how unlike Costa Rica Mexico is. While our resort was beautiful, there was a distinct chemical smell only around our beach due to how the tides came in. It smelled mostly like a chemical hair perm, and on better days it had a sulfur (rotten egg) smell. I am sensitive to smells and it was almost unbearable at times, as in I almost lost my cookies.

Anyhow, I noticed the workers at each hotel were raking the beaches to make them appear pristine and beautifully white, which symbolizes the beautiful Yucatan peninsula region of Mexico. So, the workers proceeded to rake seaweed, bottle caps, old toothbrushes, straws, and other trash into a pile. Then, instead of hauling it out to put into the garbage, the workers proceeded to dig a large hole in the sand and bury it! I guess they don’t realize that after high and low tides, and several months that this trash will reappear on the ocean surface and back to the beach.

While walking to the town which was literally up the street a quarter of a mile, I couldn’t believe the amount of trash that was thrown, dumped, or otherwise discarded along the road. It was unsightly, and also had a distinct smell of rotting debris. Then, when you get to the main part of town, there are hawkers all over very aggressively trying to get people to come into their stores and look at their wares.

The people that live in Mexico are extremely kind for the most part and I understand are just trying to make a living. However, with the drug cartels, trafficking, and the corrupt government workers, the people in Mexico have a very difficult time of it. Costa Rica is also the safest country in Latin America which makes it extremely appealing as well when traveling with families. Another social difference that was huge when looking at Mexico vs. Costa Rica is the educational system. I realized that in Costa Rica the population is highly educated in comparison to that of Mexico. Also, Mexico’s poor will live in cardboard with no plumbing or electricity. Most of the poor population that I saw in Costa Rica consisted of a decent house, albeit small, but with electricity and usually at least one television.

So, I have decided on this past visit to Mexico that it will be my last. Costa Rica is my new travel destination!