Ghosts & the Supernatural – I blast my cell number all over the Internet.  My cell number is the “paranormal hotline”.  Yes, I get many crank calls, but I also get calls that are legitimate and those lead to investigations, cleansings or just advice over the phone.

A few years back, I received a call from a person in New Jersey that was claiming that he was craving human flesh, that he wanted to eat someone.  Of course, I thought this guy was a total nutcase.  The caller told me he was hearing voices in his head that was telling him to consume somebody.  After I got off the phone with this psycho, I typed up an email to his local police and said to watch out for this guy.  I believe the police talked with him and I have heard nothing from this guy or heard of any cannibalistic crimes in his part of New Jersey.

But it made me think that in Algonquian folklore, the Wendigo is a legendary cannibalistic monster that roams the woods of Canada and parts of Northern United States.  The Wendigo also can transform into a malevolent evil spirit.  This spirit can possess a person and give them cravings of human flesh.  The locals of the Northern forests of the Atlantic Coast and Great 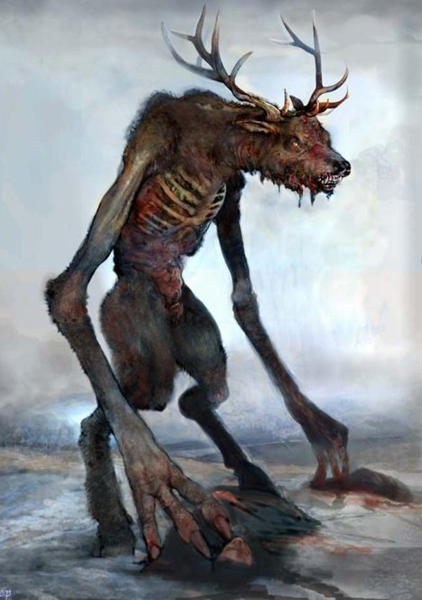 Lakes Region believe in this mythical monster.  If you ever watched the TV series Hannibal Lecter, they would show their version of a Wendigo.  This is a pretty accurate version according to the Algonquian legend.  The Wendigo is depicted as a malnutritioned humanoid with antlers, dark complexion, black sunken eyes.  The Wendigo is associated with savage homicides, a hunger for human flesh and insatiable greed.

In the world of psychology, there is also a medical term called Wendigo psychosis.  According to psychiatrists people with this syndrome have a unstoppable craving for human flesh and may have the fear of becoming a carnivorous cannibal.

Do you want to hear a scary story of a possible Wendigo?  A story that will bring shivers down your spine?  Let me tell you the story of Vince Weiguang Li.  At 12:01 p.m. on July 30, 2008, Tim McLean boarded a bus to return home after a long day at work in Alberta.  He was headed for Manitoba.  The bus was a Greyhound.  Tim got comfortable in his seat, put on his headphones and fell asleep.  He saw a passenger board the bus and gave him a small nod of recognition.  The person was Vince Weiguang Li.  While Tim fell asleep, Vince stood up and pulled out a huge hunting knife and repeatedly stabbed Tim.  The people on the bus were shocked and horrified and ran out of the bus.  Vince continued stabbing Tim and during the course of his stabbing, decapitated Tim.  Vince held Tim’s head to the window, so the passengers could all see that Tim was now beheaded.  Vince started consuming the body and ate part of Tim’s heart and his eyes.  The passengers outside became very ill and started vomiting.  When Vince was convicted of this horrifying crime, he was placed in a mental institution.  Vince claims he heard the voice of God tell him to kill Tim because he was evil and was going to try and kill him.  Some people point to the fact that Vince could have been possessed by the Wendigo spirit.  Many people to this day feel this is a good case that points to the fact that the Wendigo legend is fact.

The Wendigo legend has been around for a long time.  In 1878, Swift Runner a Plains Cree trapper from Alberta ate his wife and five children.  Instead of trekking 25 miles to the Hudson’s Bay Company Post to get some food for his family, be decided to eat them.  Psychiatrists look at this case and stamp it with “Wendigo psychosis”.

“Another well-known case involving Wendigo psychosis was that of Jack Fiddler, an Oji-Cree chief and medicine man known for his powers at defeating Wendigos. In some cases, this entailed killing people with Wendigo psychosis. As a result, in 1907, Fiddler and his brother Joseph were arrested by the Canadian authorities for homicide. Jack committed suicide, but Joseph was tried and sentenced to life in prison. He ultimately was granted a pardon, but died three days later in jail before receiving the news of this pardon.”

The Wendigo psychosis may have a further range of influence.  Some people theorize that Richard Trenton Chase aka the Vampire of Sacramento may have had Wendigo psychosis.  Richard was fond of biting the head off a bird, turning it upside down and drinking the bird’s blood.  Of course, he slaughtered a group of people in Sacramento and cannibalized some of them.  Richard is another one that heard voices in his head.

One more prime candidate is Jeffrey Dahmer aka the Milwaukee Man-Eater.  Jeffrey had insatiable appetite for human flesh and there are some that believe he was possessed by the Wendigo spirit.

We live in a strange world, a strange universe.  With the Wendigo spirit, anything can be possible.  This is one legend I wish would fade away into history.

I believe it is time to take a breather from stories of the dreaded Wendigo.  Let’s take a shift and look at a book that is now at Amazon.  The book is called Screwed by the Aliens.  Here is the book review: 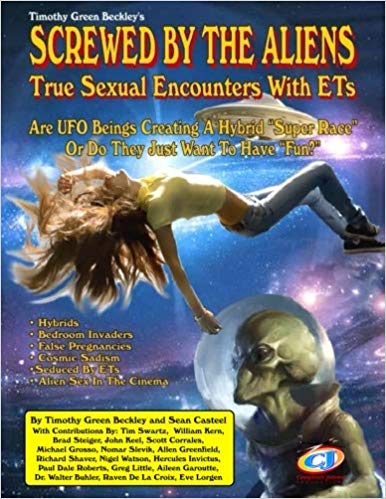 Comments: Timothy and Sean have me at “sexterrestrials”.  It appears that many UFO documentaries, UFO books try to ignore the sexual encounters that aliens have with humans.  It appears that it has been going on for a long, long time, for in Genesis 6:1-2, 4 it says: “they saw that their daughters were fair and took them as wives.”  This book should be in every paranormal enthusiast and paranormal investigator’s library as a reference tool, as a bible when investigating anything extraterrestrial.  Timothy hits it on the nose when he says: “No,this isn’t porno,but it might as well be to some individuals, as many of the cases described are about as salacious as they come……. this material is said to be true and not fluffed up…”  Some of the stories will have you sitting at the edge-of-your-seat.  One story that hit me like a rock was the story of Suzanne Brown from Cheshire.  The story happens in 1965.  A five foot tall Nordic alien with shoulder blond hair.  Suzanne received visits from this alien at the age of 12 and they appeared to be loving. Things get real, when one day she wakes up with her clothes soaked in blood and YES, there is a lot more.  This book will take you on a journey that will touch upon Aleister Crowley, hybrid race known as the Nephilim; people with a Muslim background who see the incubus phenomenon as a proof that they are being haunted by a Jinn; Rosa from Tuscany who received unwanted attention from aliens who swiped her stockings!  Let me tell you, I could not put this book down!  Yeah, there is more!  Here are some examples:  Tara Green says she was raped by reptoid aliens since childhood.  Her story is compelling and you will be glued to every word of her story.  Sexterrestrials have been around since ancient times, you hear of old stories of fairies abducting humans, angels having intercourse with humans, etc.  This book will open up your eyes.  You will be fascinated with Brad Steiger’s Intergalactic Sex!  John Keel talks about The Mystery of the Bedroom Invaders.   Tim R. Swartz – A Flying Saucer Love Story, the ET Guide to Picking up Earth People!  You will also love all of the photos, the drawings in this book.  For example the beautiful drawing of an Extraterrestrial Seductress and the humanoids from the famous Villas-Boas case!  In this book you will also see the connection to our media, our movies from Flash Gordon to Buck Rodgers. You will get the scoop on sexual probes.  One story in this book that brings shivers down my spine is the Villas Boas case and this book really gets into some details.  Brad Steiger talks about phantom pregnancies.  There is so much in this book, I could actually write a book about this book!  Get a shocker with Timothy Beckley’s reveal on the Birth of an Alien Hybrid – The Christa Tilton Story!  It’s bad enough aliens have been manipulating our DNA, but it’s even worse when they are forcefully having sex with various people!  Screwed by the Aliens is a Summer blockbuster movie unfolding in my hands.  This book is absolutely AMAZING, can’t get enough!!

Drones Being Used to Study the Costa Rica Environment