Weather Could Dampen 4th of July for Many in Midwest & Plains

Weather News – Well in Costa Rica it is raining almost every afternoon, but for many in the USA this is not the kind of 4th of July weekend they wanted. 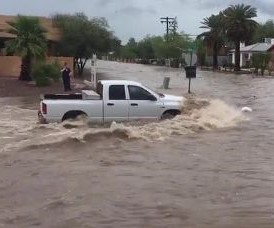 Severe weather was threatening large swaths of the Midwest and Plains on Sunday, with forecasters warning that heavy rains and potential flash floods could put a damper on the holiday weekend.

The National Weather Service said the threat of flash flooding was moving from Kansas and Missouri overnight into the Ohio Valley on Sunday.

Between 2 and 6 inches of rain had fallen in parts of Missouri and eastern Kansas by early Sunday morning, according to the Weather Channel. It said that Wichita experienced flooding overnight, as did the Kansas cities of Hesston, Newton and Moundridge.

Flash flood watches were in effect for other parts of the central Plains and mid-Mississippi Valley — including St. Louis and parts of Ohio, the Weather Channel added.

The storms will spread eastward on Monday into the mid-Atlantic — leaving Fourth of July festivities in flux.

A chance of heavy rain throughout the day Monday could postpone fireworks on the National Mall for the first time in history, according to NBC Washington.

West Virginia — which has been ravaged by deadly floods — was among the states bracing for heavy rain on Monday. The National Weather Service bureau in Charleston posted a flash-flood watch beginning in the pre-dawn hours Monday through the day.

Entrepreneurs & the Co-Creation of Ecotourism in Costa Rica