World News -Think of it as half drone, half motorcycle: A new hoverbike prototype aims to make flying as simple as riding a bike. 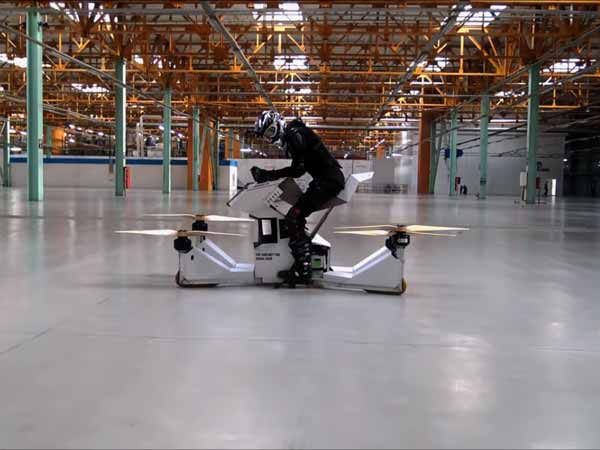 Hoversurf, a Russian drone startup, recently unveiled its Scorpion-3 hoverbike in a test-flight video — making it the first manned quadcopter that has undergone testing, reported Futurism, a science and technology news website.

The Scorpion-3 combines quadcopter-drone technology with a traditional motorcycle design, resulting in an electric-powered hoverbike that can lift itself and a pilot into the air. According to Hoversurf’s website, the hoverbike can be flown by both professionals and amateurs, because the bike’s custom software allows for both manual and automated control.

“[The] Scorpion platform is the next step in accessible amateur flying developed to inspire athletes, engineers, scientists and inventors around the world,” Hoversurf officials said on the company’s website. “[It] is equipped with a safety system powered by state of the art flight controllers, special logical programing and passive elements with computer aided speed and altitude limiting.”

While the Scorpion-3 could offer new mass transportation options, like Dubai’s recently announced passenger drone, Hoversurf said it designed the hoverbike with extreme sports in mind. A compact dirt bike inspired the hoverbike’s sport-utility frame, and the pilot’s uniform (seen in the video and on the website) is reminiscent of a motocross driver. The company describes the hoverbike’s ride as “surfing through the air.”

Scorpion-3 is not the only hoverbike to take to the skies. Beyond the autonomous “taxi drone” that is scheduled to launch in Dubai, there are both private and public prototypes of similar high-tech modes of transportation in the works. According to Futurism, the U.S. military partnered with Malloy Aeronautics to build a hoverbike that could help soldiers in the field.

Aerofex, a California-based aerospace engineering company, is also developing a passenger drone. The company’s so-called Aero-X is described as “a hovercraft that rides like a motorcycle,” Live Science has reported, and can fly at 45 mph (72 km/h) up to 10 feet (3 meters) off the ground.