Walking Among the Clouds in Monteverde, Costa Rica

Costa Rica Travel News – The creature on the side of the road looked like a cross between a monkey, an anteater and a raccoon, and it was certainly something I had never seen before. 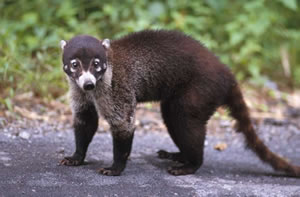 I frantically parked the rental car, nearly forgetting to put on the handbrake, and grabbed the camera. During all this the fluffy animal with the bushy tail simply continued with what it had been doing… eating crisps out of a discarded bag. I circled around taking pictures and mini-movies, though there was no rush. The white-nosed coati, as I later learned, is a frequent sight in Costa Rica and unafraid of humans.

I was on my way to the Monteverde Cloud Forest Biological Reserve for a two-hour guided tour through this unique ecosystem. Due to its high altitude – some 1,400m above sea level – Monteverde receives a steady supply of clouds, hence its name. The moisture, often in the form of fog, catches on the branches of the tallest trees and drips down to the other organisms below.

This complex and far-reaching ecosystem of some 14,200 hectares harbours more than 100 species of mammals, 400 species of birds, tens of thousands of insect species, and more than 2,500 varieties of plants, 420 of which are orchids.

Running a few minutes late due to my encounter with the adorable coati, I was the last one to join a small group of six which was headed by local guide Christian Chaves. Armed with giant binoculars, our first stop was the hummingbird gallery which was located close to the entrance of the reserve. It was thrilling to experience these beautiful birds fluttering around me and perching on my hand as they sipped sugared water from a feeder. There are some 51 varieties of hummingbirds, ranging in hues from green and blue to red and magenta, with no two birds looking the same.

The trails in the forest were well maintained, though it became a bit crowded when a special bird or animal was spotted. Our first highlight was an emerald toucanet, the smallest toucan in Costa Rica. Even though I was looking through the binoculars, it was hard to see the bird, which was perfectly camouflaged in its environment.

“I remember eating toucans and other animals when I was five years old,” reminisced Christian, now in his late twenties. “Today everything is protected.” In 2012, Costa Rica became the first country in the Americas to ban recreational hunting.

A few minutes later, we saw a large group of people on the trail ahead of us. News that a quetzal had been seen in the canopy spread like wildfire amongst the guides and their parties. The national bird of Guatemala is a rare sight (though the five species are not under immediate threat of extinction) and can be found mainly in humid highlands. Unfortunately, the quetzal was partly obscured by a large branch, but I could still make out its long tail feather and green plumage.

Unaware of its celebrity status, the bird was having a breakfast of small avocados. 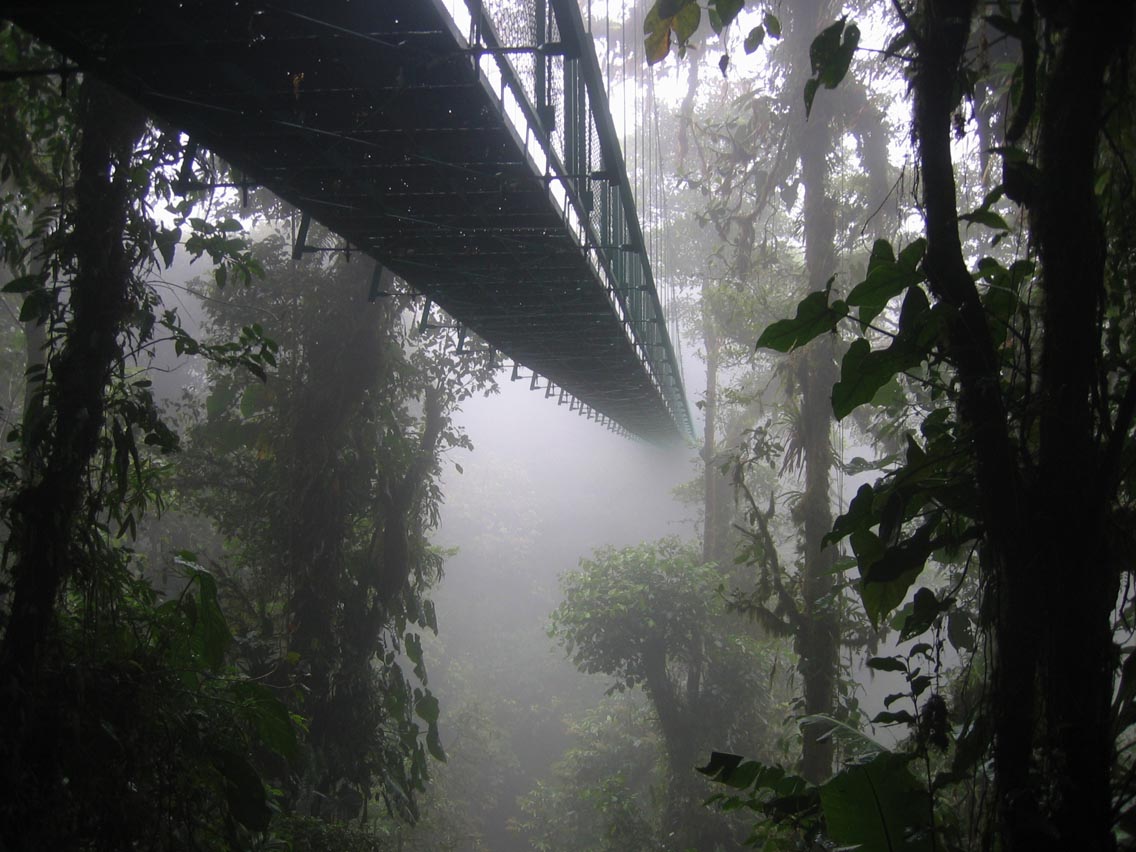 After ticking the toucan and quetzal off my “bucket list” for the trip, I was hoping to see a sloth hanging in the trees, but first it was time to focus on flora and fauna much closer to the ground. Our guide pointed to a tiny flower with a single leaf, not much bigger than the tip of my finger. It was an orchid so small that it could hardly be seen with the naked eye. It is believed that the Monteverde region has the highest diversity of orchids in the world. The Monteverde Orchid Garden, located in the village of Santa Elena, displays an incredible 426 different types.

Venturing further into the reserve, we came across various hummingbird nests, a picturesque waterfall, a wasp nest, a green snake which was hanging in the trees and another toucan. There was always something to see or hear. “The producers of Jurassic Park came to Monteverde to record the sounds of the cloud forest for the movie,” Christian told us.

The two hours were over in the blink of an eye but I had yet to see a sloth. On the spur of the moment, I extended my stay for another night and booked an evening tour for the same day.

At around 5:30pm I was picked up at my hotel by a small van and I joined a group of Australians, Danes and Germans. On the outskirts of town we stopped at the side of the road and I witnessed the most colourful and breathtaking sunset of my life. Overlooking the lowlands all the way to the Pacific Ocean, the sky changed from a light orange to a violet red and dark purple in less than 15 minutes. I stood in awe and after initially trying to catch the nature spectacle on camera, I had to force myself to just stand still and instead try to capture the moment in my memory.

Only half an hour later, night had fallen over the forest. We were given small torches and instructions to remain on the track and be as quiet as possible. After only five minutes of walking we heard the rustling of leaves and the faint light of our torches shone on a family of raccoons. The group of one adult and four to five babies was accompanied by a coati.

The forest appeared mysterious in the dark. We found many birds resting in the trees such as a green toucanet, a thrush bird and a couple of turkeys, but I also saw creatures that I had not seen during the day. A yellow pygmy frog sat on a lush leaf and did not dare to move when we congregated around it. In size it could not have been bigger than a centimetre. Afterwards, in quick succession we also observed moths, a bat and a medium-sized white spider.

“Now, I need you all to be extra quiet and walk on tiptoe as I want you to meet a special friend of mine,” announced our guide, Andres.

One person after another, we shone our torchlights into a small, sideways hole in the ground. When it was my turn, my first instinct was to drop the torch and step back. A tarantula, about the size of my hand, was sitting in the cave guarding “her house”. I am not a big fan of spiders, but this was a unique opportunity to get up close and examine the hairy creature.

At the end of the walk, we could clearly hear a rustling in the bush again. An armadillo? Maybe even a cougar? We never found out. And the sloth? I’ll just have to come back for another visit.

by wibke carter, from www.scotsman.com