Well if you are looking for how to try to be as hoity toity as possible and try to show off as much as possible Visa might have the credit card for you.  I do not think I can think of something more materialistic and more of a waste. 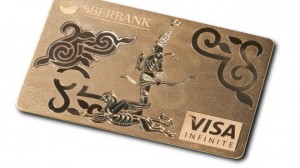 In a week in which gold prices neared their highest level in three weeks and were seen by one company to reach $2,000 an ounce next year, the precious metal is enjoying its time in the sun.

It’s also finding its way into the wallets of some of the richest consumers in Kazakhstan – in credit-card form.

Visa and Sberbank have begun offering a credit card made of solid gold to Sberbank’s top 100 customers in Kazakhstan as a companion card to the Visa Infinite card, hoping to capitalize on what they see as a “growing appetite for elite, status-symbol cards.”

The card is embedded with 26 diamonds equal to 0.17 carats, but it’s not just for show. While it doesn’t have a magnetic strip, it can be used for chip-based transactions.

The card is only available to the top 100 Visa Infinite customers in Kazakhstan, a sliver of the 400,000 Visa Infinite cardholders in the Asian Pacific region the company reported as of June 30.

A spokesperson for Visa says the qualifications for getting a Visa Infinite card include income and assets under management with the issuing bank. Perks of having the Sberbank Visa Infinite card include having instant access to a personal manager, medical services and health and travel insurance, as well as 24/7 concierge service and “fast-track immigration” at more than 280 airports worldwide.

Visa says the card is a symbol of the cardholder’s high-end lifestyle.

“Ultra wealthy cardholders want differentiation and with this coveted piece of luxury, the card becomes the ultimate status symbol,” said James Lim, head of consumer products for Visa’s operations in Asia, Africa, Europe and the Middle East, in a statement.

Visa hopes to make the card available in more markets across Asia, Africa, Europe and the Middle East. No plans have yet been announced to introduce the card in to the U.S.

Relocating to Costa Rica – Moving Your Household Items and Vehicle