Virgin of the Sea Procession in Costa Rica

Costa Rica News – Many tourists and media were offered a little taste of the history and culture of Costa Rica today.  Dozens of boats of all different sizes made the journey from Puntarenas to Playa Narajo today. 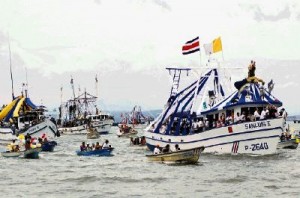 Some of the viewers of the procession included parishioners and tourists in the area of Puntareas.

Different from the previous years where the boat responsible for carrying the virgin of the sea was a fishermen’s, on this occasion the organizers decided to use the ferry San Lucas II which provides service to Playa Naranjo.

It offered more space and comfort for the special guests and the press. The procession was televised live to millions of Catholics from Latin America and Spain by the channel Telefides.

Among the special guests was President Laura Chinchilla who documented the procession with photos of the marina which were uploaded to her account on Twitter. “Many boats are decorated and fishermen joined with joy to the marine pilgrimage”, wrote the President.

The procession started at 11:20 a.m. from the ferry terminal in the El Carmen neighborhood. Arriving at thewell known ‘tip’ of Puntarenas where a priest was responsible for imparting the blessing to each of the boats decorated with flowers and white and yellow balloons.  They then sailed to the cruise ships dock before returning back to the starting point.

While on the beach, hundreds of people enjoyed both the festivities, the sand, and the sun.

Puntarenas is the province with more fishermen in the country, the majority concentrated in the Gulf of Nicoya and as tradition has this festival and procession to honor its Patron Saint.

We can only hope that they are not praying for not getting caught shark finning and using illegal fishing methods.

Only in Costa Rica for Week of July 8th