World News – Construction sites are becoming popular scenes for discoveries of everything from prehistoric mammoth fossils to newly discovered spider species. In following that trend, a recent construction project near Gliwice, Poland uncovered a potential graveyard, which upon further investigation revealed a gruesome fate. 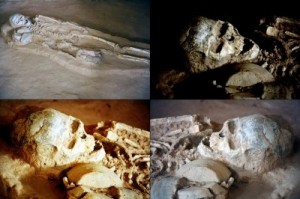 The site, which contains corpses with heads placed between their legs, is being labeled as a suspected vampire burial. The practice of burying bodies in this fashion is an ancient Slavic practice for disposing of suspected vampires, with the belief such creatures could not return from the dead once beheaded.

The burial site contains the remains of four individuals, all placed in similar fashion. Because the burials do not contain other artifacts, such as jewelry, it is difficult to tell exactly when these burials occurred, an archaeologist familiar with the evidence told Polskie Radio. However, the researcher noted, it is likely the burials occurred before 1914 — the date when the last recorded “vampire” burial took place in that country, according to a Newser report.

In speaking with Dziennik Zachodni newspaper, lead archaeologist Dr. Jacek Pierzak said early indications suggest the grave could be dated to around the 16th century.

While archaeologists are calling the site a suspected “vampire” burial, other local reporters have suggested these individuals were not vampires, but rather victims of an execution at a known nearby gallows, according to a report from The Guardian.

However, this is not the first grave to be unearthed and subsequently attributed to vampirism. Bulgarian archaeologists just last year uncovered two medieval skeletons with iron rods driven through their chest cavities. Bozhidar Dimitrov, an archaeologist with the National History Museum in Sofia, told The Guardian about 100 such skeletons have been unearthed in Bulgaria. He noted the gruesome practice is not confined to Bulgaria either; it has been rampantly carried out across the Balkans for centuries. 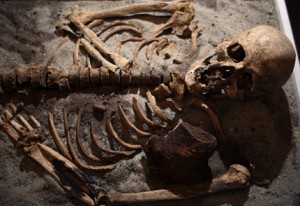 Dr. Tim Beasley-Murray, a senior lecturer at UCL’s School of Slavonic and East European Studies, who teaches a course on vampire culture, said the root of the vampire legend can be traced back to ancient Egypt and Greece. From there, it spread up through the Balkans into Eastern Europe.

“There is a strong Slavic belief in spirits. Romanian folklore has vampiric figures such as the moroi and strigoi. The word ‘mora‘ means nightmare. But these are common to many cultures. We often see bird- or owl-like figures that swoop down and feed on you,” Beasley-Murray told The Guardian.

While vampiric legend is rooted deeply throughout the Old World, there has not been a lack of vampire burials in the New World as well.

Archaeologists working in a small Eighteenth- to Nineteenth-century cemetery near Griswold, Connecticut in the 1990s uncovered something highly unusual: the grave of a 50-year-old man whose head and upper leg bones had been laid out in a “skull and crossbones” configuration.

While further examination led researchers to conclude the man died of what was then called “consumption” — what is now known as tuberculosis — initial belief was he was a vampire. But those who suffer from this infectious disease grow pale, lose weight and appear to waste away — a common attribution to those who are labeled as vampires, as well as their victims.

To play it safe, it is likely the locals decapitated the man’s head just in case he was a vampire.

Many modern archaeologists now think that belief in vampirism began because of misunderstandings about diseases such as tuberculosis, as well as a lack of knowledge about the process of decomposition. Although most Americans and Europeans were familiar with changes in the human body immediately following death, they rarely observed changes that occurred over weeks and months.
Lawrence LeBlond for redOrbit.com – Your Universe Online