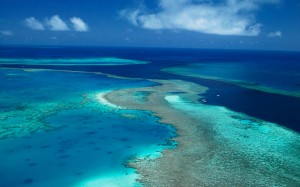 The two AV-8B Harriers were conducting a training mission on Tuesday that would have them drop the bombs on a range on Townshend Island. When the time came to drop the ordnance, the pilots were told that the range was not clear. After trying several times, they began to run low on fuel and realized they could not land with the bombs they were carrying.

“They chose to save the aircraft,” one U.S. official said, explaining that the Harriers could not land with the ordnance and they could not continue to wait with their shortage of fuel.

The Great Barrier Reef, the world’s largest coral reef, stretches more than 1,200 miles along the Queensland coast, from the mainland towns of Port Douglas to Bundaberg. The reef contains an abundance of marine life and comprises more than 3,000 individual reef systems and coral cays.

Each Harrier dropped two 500-pound bombs: one BDU 45 and one High Explosive GBU 12, for a total of four. The BDU 45s are inert and the GBU 12s were unarmed when released, so none of the bombs exploded.

A U.S. official explained that the chance that one of the two bombs could still explode is extremely remote.

The bombs were dropped roughly 16 nautical miles south of Bell Cay in the Great Barrier Reef Marine Park. The U.S. official said the pilots and commander selected a location at sea where the risk of reef damage would be minimal. The official described it as a “deep channel,” saying it was about 60 meters (about 197 feet) deep.

The bombs do not pose a danger to ships, the official explained.

The U.S. Navy is already in the early stages of planning a salvage operation to recover the bombs. The Marine Corps and Navy are also investigating the incident, along with Australian authorities.

The Harriers were attached to the 31st Marine Expeditionary Unit, which operates off of the USS Bonhomme Richard. They were exercising in the area in advance of Exercise Talisman Saber.

Technology, Time and Being