US Bobsledder Breaks Through Bathroom Door

2o14 Winter Olympics – It seems that Russia will most likely not be hosting the Winter Olympic Games anytime again soon.  There have been problems even before the start of the games and they continue. 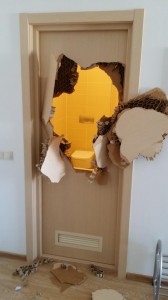 Russia arrested 4 gay rights activists on opening day of Winter Olympics opening ceremony to start of what is supposed to be a time to honor some of the best athletes in the world. There has been so much negativity around these games it has taken away the time and effort these elite athletes have spent becoming the best at their respective disciplines.

Unclean drinking water and  accommodations that are below standards in Sochi are just a few issues that have made the headlines during the Winter Olympics to go along with the gay right protests. It seems like faulty doors need to be added to that list of problems after US bobsledder Johnny Quinn got stuck in the bathroom and had to break out.

The good news was he was taking a shower and not going number 2.

The image of the broken door was retweeted more than 2,500 times from the bobsledder’s Twitter account. There was no word if Quinn stuck his head out of the gaping hole in the door and stated “Here’s Johnny” before escaping, mimicking the scene from The Shining.

It’s cold enough there, it might have worked out well.

The History of Costa Rican Soccer