Costa Rica News – Costa Rica looks to be getting a few days of more rain that normal during rainy season due to the tropical depression making its presence in Costa Rica over the next few days. So grab your umbrellas or stay in and watch movies if you can. 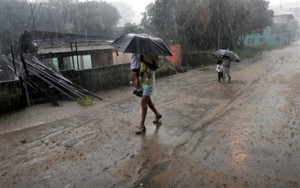 The National Meteorological Institute (IMN) today warned about the possible influence that a tropical depression moving in from the the Caribbean Sea at 10 kph.

According to a press release issued by the IMN it is expected to cause effects on the Pacific side of Costa Rica and in the Central Valley.

He explained thatin these areas sectors  downpours and thunderstorms are expected in the afternoon and early evening hours.  In the South Pacific the estimated amount of rain is between 20-80 mm in 24 hours (mm means a liter of water per square meter). To the north-central Pacific between 10-50 mm and the Central Valley of 5-30 mm.

Meanwhile to the north will have partial cloudiness all day, rain and showers in mountainous areas. The estimated amounts will be 10 to 30 mm.

In both the Caribbean will be partly cloudy most of the day, with rain in the mountains. The estimated amount will be 5 to 15 mm.

The IMN reported that the length of the effects of the system depends on its trajectory, velocity and intensification, however it is anticipated to last until Wednesday.

The IMN recommended continued watch in areas made vulnerable by rainfall of recent days in Guanacaste and the South Pacific. This also applies to places prone to flooding and landslides.

They are requiring monitoring in the Central Valley in sectors with recurrent flash floods and sewer saturation.