Entertainment – For many of us that went to college in the 90s and thinking back on those years, most of these following items are very true.  I am certainly happy that social media and things like Instagram and Snapchat did not exist when I was in school.

1. You got your first email address in college.
Your parents set up AOL accounts so they could email you.

2. You and your roommate shared a landline.
“After the beep, press 1 for Doree, press 2 for Sherry.”

3. So when you got your monthly phone bill, you had to split up the charges.
“Did you call Portland on Oct. 5 for 37 minutes?”

4. There was a smoking section in the dining hall.

5. In fact, you could pretty much smoke anywhere, including your dorm room.
Your roommate questionnaire asked if you were a smoker. (Note: Smoking in bed not recommended, even in the ’90s.)

6. You had a Pulp Fiction poster on your dorm room wall.

7. Right next to all the Calvin Klein ads.

8. Thursday nights were for watching Friends in your dorm’s common room.
Your RA also organized movie nights. On VHS, of course.

9. You cast your first vote in an election that a Clinton or a Bush was running in.
Actually, this would’ve been true in the 2000s also. :/

10. If you had your own computer, it probably looked something like this.
If you were lucky, it came with a 28.8k modem. 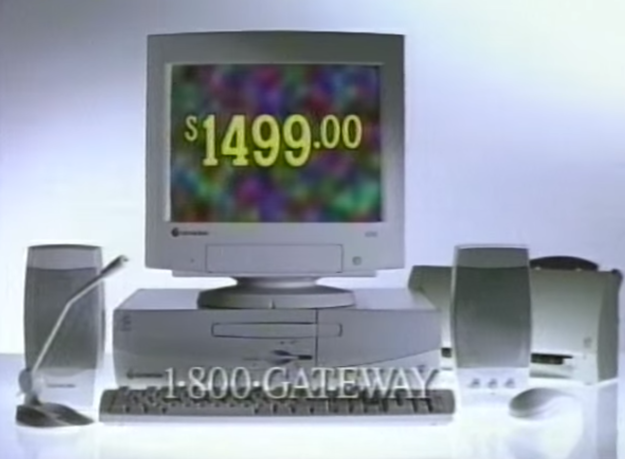 11. But even if you did, the ones in the lab were much faster.
But you needed to make sure you had enough money on your card to print.

12. To choose your courses, you pored over the physical course catalog.
If you were lucky, your school also had an unofficial guide to courses that told you the real deal.

14. You got an actual printed facebook of all of the incoming freshmen.
And you studied it obsessively to figure out who you might become friends with.

15. You also got a printed phone book with everyone’s school AND home numbers.
At my school it also told you which fraternity or sorority people were in. Lol.

16. And you could call anyone on campus just by dialing their “extension.”

17. When you got your roommate assignment, you had NO IDEA what they looked like.
You had to actually call them or write them a letter to find out anything about them.

18. Writing letters to your friends at other schools was a fun way to keep in touch.
Sending emails to each other just wasn’t the same.

19. No one had cell phones, so making plans was…interesting.
“Let me just call my machine to see if Julie left a message.” HOW DID WE EVER GET ANYWHERE?! (If they did have one, they probably looked like this.)

20. You could also leave a message on your friend’s dry-erase board.

21. Sometimes you’d just wander from party to party, looking for your friends.
WHERE IS EVERYONE.

22. You found out about parties from flyers.

23. But if you did want to go to a bar, fake IDs were much easier to make and get.
Holograms weren’t really a thing, so that girl in your dorm who had a digital camera and a laminator and knew how to use Photoshop was your best friend.

24. You made your own webpage on your college’s server.
It looked like a bad Geocities page.

25. You took notes in class…in a notebook. With a pen. By hand.
And then you’d go back and highlight the important stuff when you were studying for the midterm.

26. “My printer wasn’t working” was a legit excuse for why you weren’t handing in your paper.
Also, you physically handed in papers.

27. “My floppy disk got corrupted” was another actual excuse.
Because you kept all your work on a disk.

28. But if you had a BIG project, you put it on a Zip disk.
And hoped that the computer lab had a Zip drive for you to use.

29. When it came time to find a job, you went to Career Services and flipped through their binders.
Binders full of jobs!

30. If you were traveling and you wanted to call home, you had to make sure you had your phone card handy.
Don’t even try to call your parents collect.

31. When you made a new friend, you went through their CD books to see if you’d have music in common.
Smashing Pumpkins, check. Hole, check. Matchbox Twenty, wait a second…

32. Your significant other, and your friends, made you lots of mix tapes.
That were actual…tapes.

33. You played all your music on a mini stereo system.
Extra points if it had a multi-disc changer.

34. When you went to work out, you brought along your Sony Sports Walkman.
It had a radio, of course.

36. It still sounds weird to you when people refer to Ecstasy as Molly.
Probably even weirder for all the women named Molly out there.

37. You are so, so, SO thankful that Facebook, Twitter, Instagram, Tinder, Snapchat, Vine, texting, sexting, selfies, and everything else did not exist when you were in college.
Your collegiate escapades were not recorded for public consumption and you never had to worry about potential employers finding embarrassing photos of you online. Although you probably would’ve killed it on Tumblr, tbh.

Would You Like to Buy Some Ash From Costa Rica’s Turrialba Volcano?