The Yellow Belle & A Haunting in Penryn

Deanna Jaxine Stinson and I, received a call on the paranormal hotline, in regard of a female ghost that has been seen in downtown Sacramento.  A specific location was given.  The location is near a Victorian mansion built in 1885 by a Gold Rush millionaire.   This was verified by HPI Paranormal Researcher Bob Fulton.  When contacting the owner of this mansion, they said that the mansion is NOT haunted.  Deanna, being a medium psychic is very good in picking up on paranormal activity.  For an example on her first investigation with HPI (Halo Paranormal Investigations), we were sitting in the bedroom of a haunted house.

Deanna looks at me and says…”start recording.”  I asked “why?”   Deanna says: “the ghost is talking to me right now.”  I started recording and sure enough I capture a full sentence from a disembodied voice.   Deanna has proven herself many times over and I will give you one more example.  While driving around in Elk Grove, Deanna tells me to pull into a parking lot.  I asked “why?”  Deanna says…”just do it, there is something in the sky!”I look at the direction she was pointing and I don’t see anything, nor does she see anything, but she senses something in the sky. She snaps a photo and when we look at the digital photo, there are 3 UFOs in V formation in the sky.  This picture could not be disputed by UFOlogists and was published in an issue of Fortean Times.  David Mata of Woodland and 2 other friends on September 9, 2018, Sunday at 6pm 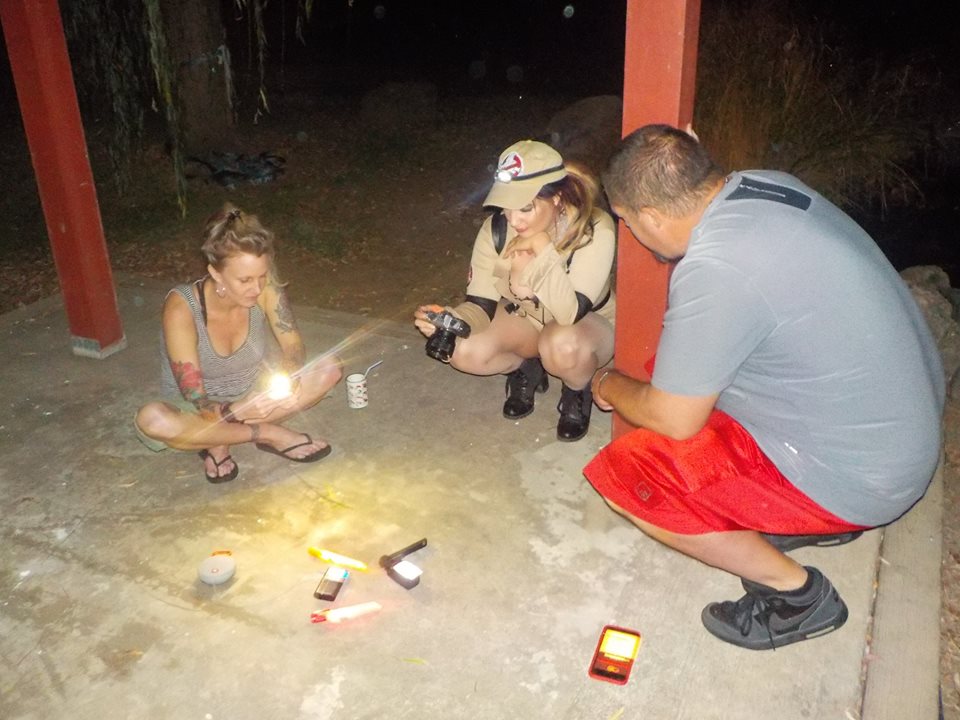 were walking around downtown and spied a lovely woman in the brightest yellow dress that they have ever seen.  The dress was long and went down to her ankles.   The dress was also somewhat puffy from the waist down.  The lady looked like she was in distress.  David thought the dress looked Victorian, something he has seen in movies and he wondered why this lady in yellow was in distress.

I am going to call this lady in a yellow dress, The Yellow Belle throughout this article, so you know who I am talking about. The Yellow Belle walked right through David and his friends and when they turned around, the Yellow Belle was no where around.  With this information, Deanna and I, decided we were going to find out for ourselves if there is a Yellow Belle haunting this area of downtown Sacramento.  As we attempted to get EVPs, we capture one EVP that is unintelligible.  Then another EVP says in a female voice “talk!”  Could this be the Yellow Belle.  The unintelligible EVP sounded like a male voice and we did notice that there was a bike painted white to represent the fact a man on a bike was killed on that street corner.  Here is a video clip of this small investigation: www.youtube.com/watch?v=GL4kU22wN8o

Today is back-to-back investigations.  Just in from Kerry McConnell, a friend of Aimee Yarbrough. “Paul, I need to reach out to you. We are having some negative energy, spirits, or haunting that is so real its ridiculous.   We are located in Penryn, Ca. It started off with strange things happening about 3 or 4 months ago.  It has progressively gotten worse over the past 4 weeks.  My girlfriend has not even slept at her house for a couple weeks now.  We haven’t done a lot of research in this matter and feel it is directly related to her energy.  I would really appreciate in discussing this matter with you as we want someone who has experienced this first hand.  We have talked to shamans, mediums, and done a ton of research.  Family around here thinks she is just nuts, but we have had multiple witnesses to certain events.  Can you please take some time to hear us out in this matter and lead us in the right direction.  I see you did work for the Placer County Sheriff’s Department at one point of time and have been on the news.  I am really frightened and it is very hard for me to grasp.  Thank-you for your time.”

So on 10/27/2018 at 9pm, Deanna and I, headed out to Penryn, CA.  We met up with HPI paranormal investigators Mike Ouilhon and Alaceo “Big Al” Rosatano.  The first thing we did was interview Aimee.  Aimee says she has lived in this house for 10 months and the paranormal activity started 3 weeks ago.  The electronics in the house act up, lights turn off and on or flicker.  We actually witnessed the lights at times flickering.  Other electronics act up, like phones, vacuum cleaner, blender, etc.  Videos that were once okay, now have strange shadows in them and have a dark line move across the screen. 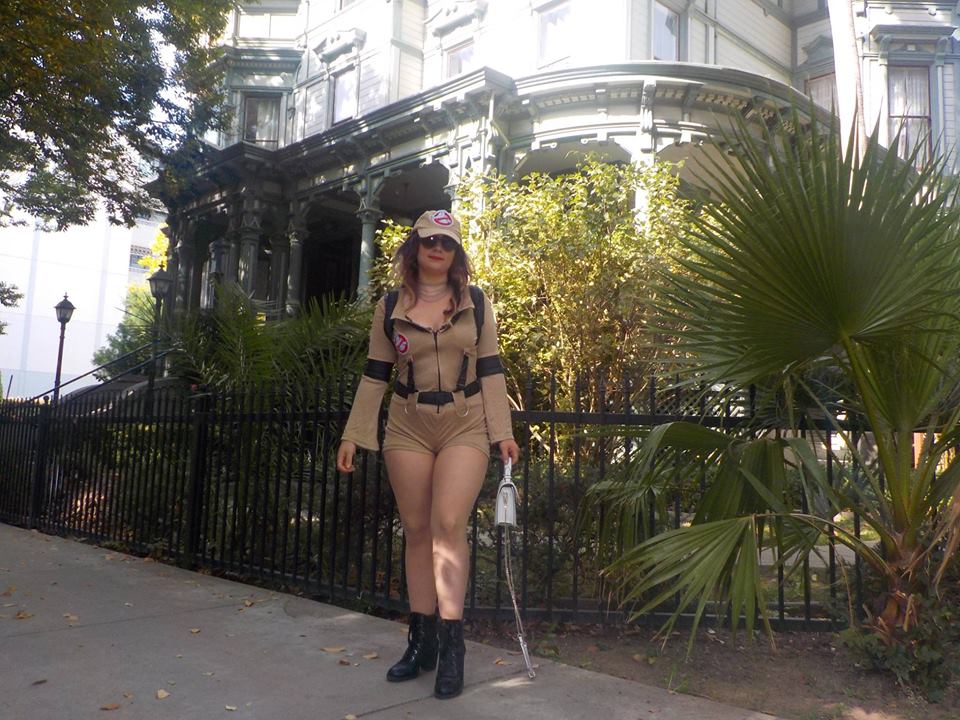 Strange images are seen on the TV and the grandson becomes frightened of the images.  Whispering is heard throughout the house.  A scream is heard and it sounds like Aimee’s screaming, but it’s not Aimee.  The entity mimics Aimee.  Aimee’s son picked up a cool looking rock from the haunted Griffith Rock Quarry down the street.  Aimee’s house is very close to the haunted Griffith Rock Quarry and the haunted Valencia Club.  Special Note:  HPI investigated the Griffith Rock Quarry and the Valencia Club. I thought Aimee’s haunted activity could have originated from the rock that her son had, Deanna reassured Aimee that the rock had nothing to do with it. Perhaps the paranormal activity originated from the oldest daughter playing with a Ouiji board at the other house and now the entities followed her here?  Sometimes Aimee feels a tugging on her shorts and no one is there.  The son heard a growl in the house.  Aimee could be psychic and that is why entities want to communicate with her?  Aimee says she does psychic things, like she guessed her grandson’s birth date precisely.  Here is unusual note: Aimee also stated that she saw a Black Witch Moth for many days flying around in her bedroom.  Aimee felt this Black Witch Moth was connected to the paranormal activity in her home.

When investigating Aimee’s home, Deanna and Mike picked up a cold spot in the kitchen area.  We discovered that Aimee has an antique dresser and the dresser and mirror spiked on the EMF Reader.  When the reader spiked I did an EVP session immediately and captured and EVP of a little boy mumbling and his dog barking twice.  Another EVP session, I asked if the entity wanted to talk and he distinctly said “no”.  Deanna felt the antique dresser’s mirror may be a spiritual doorway, a portal.  Mike used his spirit box by the pond and we gathered words such as “hate”‘; “hello”; “devil”; heaven; demon; Patrick (this was the ghost’s name); “yes”; “no”; “103”, “diamond”, “Mike (said 5 times)”.  The responses coordinated with our questions.  The Spirit Box says that there were 3 demons.  There was plenty of orb activity and some of the orbs acted as if they had intelligent movement.  Big Al was touched and Mike was touched during this investigation.  Deanna did a walk through before the investigation and did not pick up on any negative energy, but she did pick up on unusual energy with the antique dresser.  During breaks from the investigation, Deanna did a tarot card reading for Aimee and Mike.  Aimee and Mike said that Deanna was spot on with the reading.   Deanna’s son and his friend used my night vision goggles to investigate and spied a phantom man sitting in the tree along with some orb activity.  Deanna conducted a metaphysical cleansing of the house.  Big Al and I, gave Aimee a sprinkled baptism.  I conducted a Roman Catholic house cleansing.  After the cleansing, everything seemed peaceful and serene.  Thank you Aimee for the supply of coffee.  We started this investigation at 8:30pm and got home at 1:45am.  Thank you Big Al for the Trader Joe’s hot chocolate, beef stick and dog biscuits!  After everything was said and done, I drove Mike Ouilhon back to his house and Deanna and I headed home.