The World From A Costa Rica Taxi Driver

I would never think of getting in a cab in my hometown of Chicago and asking for a lift to Indianapolis, Iowa City or Milwaukee. But when I’m outside the U.S. without a rental car, I sometimes resort to long-distance taxi rides as a way of getting from point A to point B. On a recent trip to Costa Rica I took a three-hour taxi ride from Heredia, near San Jose, to Manuel Antonio National Park and two more long rides to get from Manuel Antonio to Santa Teresa on the Nicoya Peninsula after failing to find a reasonable car rental. 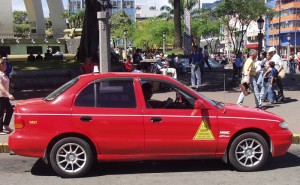 Costa Rica is blessed with incredible natural beauty. It has 26 national parks with a ridiculous array of wildlife and every type of natural terrain you can imagine, from beaches to volcanoes to mountains and more. But like any country, it has some grubby areas as well and while driving in the outskirts of San Jose, I couldn’t help but wonder why so many homes and businesses had barbed wire fences.

“You can buy drugs really cheap here,” said Mario, my 36-year-old taxi driver, when I asked him what was up with all the barbed wire. “Drug addicts need to feed their habits so they steal and people are afraid.”

I was surprised to hear that drugs were cheap because it seemed like everything in Costa Rica was expensive.”You can get some drugs here for like a dollar,” he said.”Drugs for a buck, what kind?” I asked.”Crack,” he said.I was confused by the cut-rate Costa Rican crack but also a little perplexed as to why there were white horses tied up outside tiny, very humble looking urban homes that seemed to have no real space for animals.

“The people like to take their horses into town and show them off for parades,” Mario said, explaining the phenomenon.

Mario spent a huge amount of time fiddling with his mobile phone and I resisted the urge to ask him to concentrate on the road. Eventually I realized that he was trying to stream Toy Story 3 for my children, who were sitting in the back seat of the minivan. My sons were excited to hear Buzz and Woody at an ear-splitting volume but they couldn’t really see the movie from their vantage point on his little phone and quickly lost interest.

As we barreled southbound on the highway, Mario kept fiddling with his phone until he found a song he liked. Sadly, it 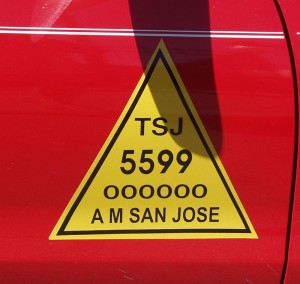 turned out to be John Waite’s truly reprehensible, “I Ain’t Missing You (At All).”

He was humming it and tapping his fingers on the steering wheel to its loathsome rhythm and when I noticed that my wife was sleeping and both my boys were entranced in a movie on our Kindle, I decided to nod off myself, hoping to avoid more American power ballads.

I woke up in a town called Jaco to Roxette’s “It Must Have Been Love (But It’s Over Now).” The earworm stayed in my head for days.

After DJ Mario played Gangnam Style for us, he told me he learned English working as a waiter on cruise ships. It was good money, by Costa Rican standards, but he worked at least 12 hours a day for 9 months at a time with no days off.

“You can’t even really meet girls,” he said as we motored through a stretch of road that was encircled by dense palm oil plants. “But when you get into the ports, well, you have to do something.”

He signed his first contract without telling his wife he was leaving the country, just days before he leaving town. She was annoyed but got over it. But after four years, once he had saved up enough money to buy a house, he decided it was time to move back to Costa Rica.

As we approached Quepos, the nearest town to Manuel Antonio, we saw derelict men sleeping off hangovers on benches, lobster-shaded gringos walking on the side of the road with next to no clothing on, and a host of signs advertising surf schools, lodges, adventure tours and even a “gentleman’s club.”

“They got a choice of girls,” Mario explained. “Costa Rican, Colombians, and plenty of Nicaraguans.”

Mario said that Costa Ricans are getting a little soft and there are tens or maybe hundreds of thousands of Nicaraguans in the country doing the jobs Costa Ricans supposedly don’t want.

I asked him about Laura Chinchilla, the country’s (first) female president.

“She changes her mind too much and she’s not very powerful,” he said. “But at least she’s honest.”

We caught a few tantalizing glimpses of the Pacific, dotted with a few rocky little islands, and as we pulled up in front of our hotel, Mario handed us his business card.

“I’ll come back and drive you anywhere in the country you want to go,” he said. It made no sense to me at all, but I just thanked him. As he drove off, I wondered what his profit margin on our $150 fare was. And I wondered what horrible American power ballads he planned to blast on the way back to San Jose.