“The Tico Times” Print Editions to Cease, Newspaper Might Be Going Under

Costa Rica News – It seems the most well known newspaper in Costa Rica might be going under or downsizing at the highest level.  This leaves the newspaper industry in Costa Rica possibly open for a new leader for English readers.  The national English weekly The Tico Times cease to circulate in in paper format and their building in downtown San Jose is up for sale. 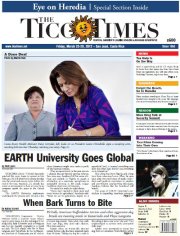 With 56 years of history, The Tico Times published its last print edition, and  will become solely an online medium, with a model based on advertising revenue and donations.

The newspaper closed due to financial reasons.

Founded by Betty Dyer as a student project of Lincoln College, The Tico Times became the leader in English half the country and the first in Central America in that language.

It is now run by Dery Dyer, daughter of the founder, who expressed in a letter with the readers the reasons behind his decision.

“The reasons for the demise of the print edition are many,” Dyer wrote. He noted a  shift in the newspaper industry into the online format, and that the global recession affected the budget of advertisers. He also said their was “the lack of long term vision and a series of fatal decisions.”

Numbering and Naming of Streets in San Jose, Costa Rica to Begin

OR its demise is simply put as a lack of interesting Tico news. Having read three english speaking Costa Rican newspapers, two online and one in print… they all have seculiar opinions and biased views. Costa Rica is about its own natural born citizens and THAT IS ALL. You can seek your residency and you can even become a full citizen. But Why? The economy is in shambles, the tourism is lessing and this idea of Medical Tourism/ Please!!!! With the US healthcare reform coming head strong, there will be no reason to come here. With US and Canadian banking regulation being put in effect a few monthes back and a major overhaul with US and Costa Rican finacial regulations over US taxpayer fraud, I can see Costa Rica swimming into a deeper recession than any other countries surrounding it. Nicaragua has a booming tourism economy and so does Panama. What gives. Sorry to be the bearer of ill will, but unless Costa Rica as a government starts contributing to the international community and stops taking, taking taking the free handouts from China, Canada and the US, well in short. Its gonna be a conquered society and the Ticos won’t even notice