The Soul Takes Nothing With Her

Nothing sounds stranger to our ears than the way the ancients viewed the afterworld. Nowadays, people who believe in the concept of a soul seem like relics. Most people now think that when you die, you die. But is it so? And can we find out on this side of the membrane between life and death?

This question is fitting on this dark Easter. On the day that commemorates the purported resurrection of Jesus after his crucifixion, the West sinks into the spiritual quagmire of the ‘war’ on global terrorism, which it has done so much to spread.

I was steeped in Catholicism when the Mass was in Latin. We were compelled to attend 6 days a week, 5 before school plus Sunday. By the time I was a senior in high school, I realized, after careful reflection and research, that the Roman Catholic Church had little or nothing to do with true religiosity.

Many years later, during meditative states, I had some possible insights into Jesus. After meeting a Chinese woman who spoke movingly about Buddha and Jesus, I began asking the heretical question: What went wrong? Then it hit me. His mission failed, but he didn’t.

Jesus taught that we must die to the self to truly live. But it was twisted into “he died for our sins.” Which means he died so people could continue being the same, and wouldn’t have to radically change. There’s great sorrow in that.

If Jesus didn’t understand what went wrong (“My God, my God, why have you forsaken me?”), how much less did his followers understand? So they turned the tragedy of his crucifixion into his purpose.

That was a diabolically cunning theological sleight of hand. The question remains however, why did Jesus’ mission fail?

There are two reasons I feel. The first and most important is that people simply weren’t ready to listen and radically change. The second is that Jesus felt he had vanquished the dark one during his trial in the desert, but it had just withdrawn, and laid a trap for him in Jerusalem.

So at the moment when he felt that the prophecy was being fulfilled, things went horrendously wrong. If this is true, its attests to Jesus’ humanness, and his greatness. He saw things through.

What I want to explore here however, is the question of whether there is anything we can call a soul that persists in any form after death.

Laying my cards on the table, I feel that the statement, “reincarnation is a fact, but not the truth” is valid.

To my mind and heart, the idea that the ‘me’ would persist after death is a nightmare. It’s like those crazy plans to download the program of the vaunted and venerated self, and every bit of crap stored in our memories, and thereby make us ‘immortal.’

If the soul is just the program and content of the self, I truly hope there is nothing after death, and that I die when I die. 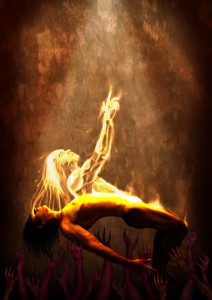 But the question about soul is much more subtle, as archaic as the word sounds in the digital age. It pertains to the essence of a person, the deepest qualities of the heart and character.

If reincarnation is a fact, what continues after a person physically dies? There’s a good deal of evidence that sometimes, at least, people are born with some imprint of someone who has lived before.

This doesn’t imply anything supernatural necessarily, much less another dimension beyond human consciousness where souls dwell. It may be a variation of the well-known pattern of familial personalities skipping generations.

Human consciousness appears to contain a record or trace of people from previous generations, which then re-emerge in succeeding generations.

In the end it’s foolish to be concerned about what if anything happens after the death of the body, when the true question is whether we can understand and make a friend of death while fully alive.

I feel that the essence of a person, called the soul, reincarnates because we haven’t learned and liberated ourselves. And that realized human beings incarnate, not reincarnate, because they have transcended death during life.

Mysteriously and wondrously, death and love go together. I don’t mean physical death (though perhaps then too), but the unknowable actuality on the other side of the membrane of life.

Life springs from and is eternally fed by the wellspring of death, the ground that existed before the universe exploded into being, and the ground into which the universe and every one of us returns.

A Dangerous Costa Rica Easter; 28 People Have Died So Far

Who is Ready to Smoke Marijuana in Costa Rica?