The Sloth Woman of Costa Rica

Costa Rica News – Becky Cliffe is a 23-year-old Welsh researcher who studies zoology at Swansea University. She used a crowd funding campaign to raise money for her work with Save Our Sloths. She is now living in the jungles of Costa Rica to unlock the secrets of sloths. 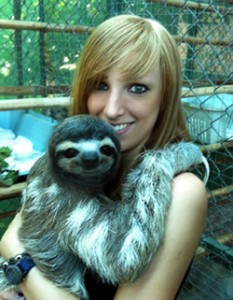 She places GPS tracking backpacks on them to learn about their feeding range and movements in hopes of helping conservation efforts to better protect these creatures, who are secretive and use camouflage to survive.

This “Sloth Woman of Costa Rica” is studying for a PhD under a scientist who consults for National Geographic’s Great Migrations series. Prior to moving to the jungle, Becky worked at the Sloth Sanctuary in Costa Rica.

She now treks through the jungle in snake boots with a machete tucked inside. She said, “Trekking through the jungle is never easy – in addition to the extreme heat and humidity, I have to be on constant guard for snakes, spiders and scorpions that could cause me some serious problems if I accidentally get too close. And then there are the huge swarms of angry mosquitoes that no amount of repellent will deter.

This all quickly fades into insignificance though as soon as I manage to spot the sloth I am looking for, it’s a really great moment that immediately makes everything worthwhile.”

She misses some comforts from back home but is able to jump in the car and get to see friends and go shopping or to the movies. She hasn’t planned too far ahead but believes sloths will keep her busy for a while because “Very little is known about how sloths survive in the wild and because of this, the sanctuary here in Costa Rica has never been able to release hand-reared orphans,” she said.

One of her most interesting tasks right now is to follow a pregnant sloth who had fallen out of her tree. The sloth was brought to the Sloth Sanctuary where she recovered and got a GPS backpack. Now that X-rays show she is alright, she will be sent back out to the wild and Becky will track her.