The Sacred Is Not Personal

Though I was brutally raised Catholic at a time when children were forced to attend Mass in Latin six days a week (five before school and once on Sunday), I no longer have an ax to grind with the Church. The word catholic has come to mean to me what it truly means: universal. Still, all this Pope Francis veneration is hard to take. 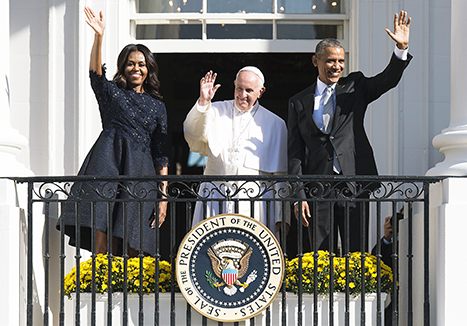 Twice on the news last night, on the BBC news no less, the phrase “rock star” was used, without apparent irony, in a report about Francis’ visit to the United States. All day the American cable TV channels were occupied, definitely without irony, with the massive security apparatus that the visit of this simple pope requires.

Arriving at the White House this morning in a small, climate-change appropriate car unsuited to his stout frame, the holy man was revealed for what he is: a master of symbolism, indirection and understatement.

Prior to the pomp on the White House lawn, CNN yappers spoke of how Francis is ‘applying ‘doctrines with mercy,’ and of how the Vatican now ‘makes Catholics proud’ because Francis emphasizes that we must ‘tend to those in need.’

Completing the surreal, anachronistic feel of the ceremony, red-clad soldiers in colonial dress marched and played Revolutionary ditties. (Weren’t the English tyrants in red, and the rebels—who would be called terrorists today—in blue?)

Before eating breakfast, President Obama turned my stomach with his opening words, “What a beautiful day the Lord has made.” He went on to dig his hole deeper by speaking about “the role of the Catholic Church in strengthening America.”

Is there a question that emerges from this morass of media and political mendacity? Is it this: We have the worst-case scenario with the blending of spiritual emptiness, loss of moral compass, declining ‘sole remaining superpower,’ dying nation-states, and the worship of celebrity. What is the best-case scenario for the worldwide cult of St. Francis?

Given all this papal adoration, even one who directly experiences the sacred on nearly a daily basis has to once again ask, can the sacred be found in any creed, belief system, building or religious figurehead?

No, the sacred flows into and through the human brain when the human mind is completely quiet, and the heart is fully open and vulnerable. Priests and popes do not hold it, and cannot confer it.

The world has become too divided, and nature has become too fragmented to persist any longer with the childish foolishness of such tropes and any popes.

So what is the best-case scenario for the convergence of hallowed and hollowed traditions with empty celebrity culture? Pope Francis has proclaimed, 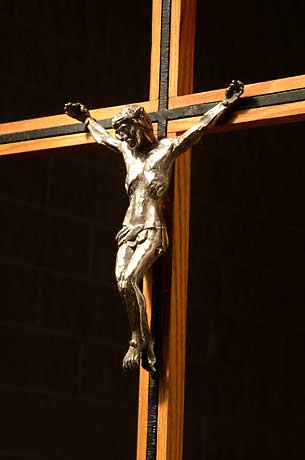 “The thing the Church needs most today is the ability to heal wounds and to warm the hearts of the faithful; it needs nearness, proximity. … Heal the wounds, heal the wounds… And you have to start from the ground up.”

That sounds excellent, and I wish him well. There are many wounds from many centuries of Church misdeeds, including recent decades of pedophilia, abuse and cover-up that the Roman Catholic Church has to heal.

However the challenge of our times goes way beyond our particular porches and porticos. And organized religion, however seemingly great the reformer of one variety, continues to be one of the main emitters of spiritual and intellectual pollution. It cannot provide an adequate response.

An adequate response—that is all that is required. But it is much more than most people realize, and much more than a kind old figurehead with a limp can possibly provide.

Nonetheless, is Pope Francis a sign of true hope, of global non-judgment, of inter-faith understanding and the moral awakening of peoples and their governments?

I would like to think so, but as one American commentator put it, also with unintended irony, “Francis’ whole approach is personal, intimate and situation-specific.” Yes, and that my friends, is precisely the problem. The sacred is not personal.

Without separating from the world, experiencing timeless moments of the sacred has become the sine qua non to inward survival in this world—that is, without which one cannot inwardly survive, much less thrive. Wholeness, mystery and, to use an old-fashioned Catholic word, benediction, can only come when scientific knowledge is set aside and experience, the known, drops away like a dried leaf falling onto a gentle stream.

Irrelevant institutions and their figureheads cannot be made relevant. But in a time of hopelessness and indirection, one can hear the yearning for hope and direction behind the sad phenomenon of Francis, and respond without respect to celebrity and spectacle.

Video Shows Everything That is Wrong with Society