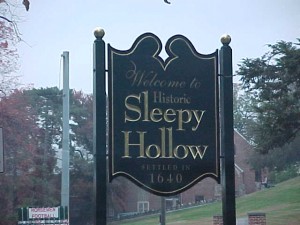 I remember how excited I was, I wanted to see where the author Washington Irving was buried at, I wanted to see if there was any truth to the headless horseman mythos. When I arrived at Sleepy Hollow, I was introduced to Bonnie Fee’s friends and I was asking about the headless horseman and of course Bonnie’s friends were telling me that the story is no myth, but that it was real.

Before I knew it I was taken to The Old Dutch Church. The story that Bonnie’s friends told me that on one cold night in 1941, a witch in the village named Femke was asked by various locals to leave Sleepy Hollow, because it was rumored that she was dabbling in black arts and a few of the village folk were getting ill for no reason. They blamed the illness on Femke.

She yelled out at a small crowd that condemned her as an evil witch. She screamed: “When the old church is demonized is when I shall leave.”

Two years later, The Old Dutch Church had a visitor. People claimed they saw a bat that was consumed by fire fly into the church and vanish. The next day, the witch had passed away and the people that condemned her as an evil witch died under mysterious circumstances within five years passing.

While I visited The Old Dutch Church and the Sleepy Hollow Cemetery, I did not witness anything I would consider as paranormal, even though Bonnie Fee thought she had seen a large shadow move across the tombstones at Sleepy Hollow Cemetery. She later said that the shadowy entity had the face of a raccoon.

I can see why Washington Irving was inspired to write a story about this colorful village. Sleepy Hollow will engulf you with its beauty, its rich history and people. I can also see how certain areas of this village can be hauntingly scary! Did Bonnie Fee really see a Raccoon Faced Entity? When I became a paranormal investigator for HPI (Haunted and Paranormal Investigations International) I would learn that Monique Alowasib was visiting Sleepy Hollow in 2003. Monique makes claim that she also saw a shadowy entity in the cemetery that appeared to have a face of a raccoon. When she saw this entity she ran and she felt something tug at her hair as she darted out of the cemetery with her two friends. Monique says she will never return to that cemetery…ever.

When I arrived back to Fort Jackson, South Carolina, I went out with 2 soldier friends in the town of Columbia. The three of us on this night would see 6 blue discs (UFOs) in formation. As they moved in formation, they later dispersed erratically at incredible speeds. I learned later that 1974 was a year considered as a ‘UFO flap’. Sleepy Hollow, New York would later on be visited by an array of UFOs. UFOs would visit Sleepy Hollow from 1982 to 1995.

I hope to one day return to Sleepy Hollow, if I do I will take delight in investigating all of the paranormal stories from this village.

How to Get First Class Holiday Air Travel